SEOUL, Dec. 2 (Yonhap) -- South Korea and the United States agreed Thursday to update their joint wartime contingency plans to deter North Korea's evolving nuclear and missile threats, the two sides said, in a sign of their stepped-up cooperation to reinforce deterrence against the recalcitrant regime.

Calls have persisted for rewriting the decade-old strategic guidance that critics said has become outdated following major advancements in the North's weapons development programs, including its refined nuclear arms, submarine-launched ballistic missiles and a hypersonic missile.

During a joint press conference with Suh, Austin took a swipe at the North's "destabilizing" weapons programs.

"We also reaffirmed our shared assessment that the DPRK is continuing to advance its missile and weapons programs, which is increasingly destabilizing for regional security," Austin said, referring to the North's official name, Democratic People's Republic of Korea. 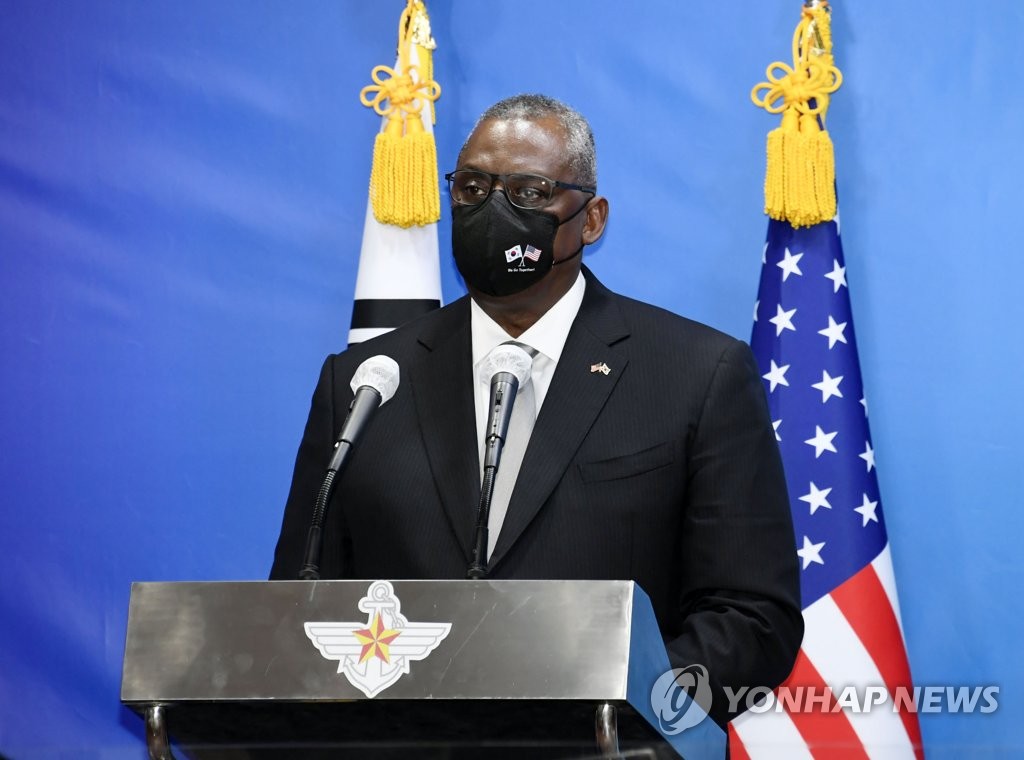 But he highlighted the allies' commitment to a "diplomatic approach" to the North.

Suh said the new SPG came as the allies shared the need to reflect on their updated war plans, the changes in North Korean threats, South Korea's defense reform efforts and the overall "shifting strategic environment."

The strategic guidance is designed to provide the allies' Military Committee, led by their Joint Chiefs of Staff chairmen, with authorization for a war plan, which is to be written by the South Korea-U.S. Combined Forces Command (CFC).

The joint SCM communique said that the latest guidance "will guide military OPLANs to more effectively deter -- and as necessary respond to -- DPRK threats to the U.S.-ROK Alliance." ROK stands for South Korea's official name, the Republic of Korea.

The new guidance marks a manifestation of the allies' resolve to harness their combined military capabilities to respond to various wartime scenarios, including the North's use of both nuclear and conventional strikes, observers said.

The guidance is likely to pave the way for a major change to the current OPLAN 5015 that lays out a series of procedures to handle an all-out war with the North. OPLAN 5015 is known to focus largely on handling conventional attacks -- a reason why calls for its replacement or an update have surfaced.

Also at the SCM, Suh and Austin pledged to conduct the full operational capability (FOC) assessment for the conditions-based transfer of wartime operational control (OPCON) in the fall of 2022 after a period of pandemic-driven delay.

The FOC assessment is the second part of a three-phase program to verify if South Korea is ready to lead the allies' combined forces during wartime.

"The minister and I also agreed to conduct an FOC assessment of our future Combined Forces Command during next fall's combined command post training," Austin said.

"This represents an important task toward meeting the conditions necessary for OPCON transition," he added.

Even if the FOC verification is over, the allies face the full mission capability assessment, the third and last part of the verification program, meaning it is virtually impossible for Seoul to retake wartime OPCON before the end of the Moon Jae-in administration in May next year.

South Korea handed over operational control over its troops to the U.S.-led U.N. Command during the 1950-53 Korean War. It was then transferred to the U.S.-led CFC when the command was launched in 1978.

South Korea retook peacetime OPCON in 1994, but the U.S. still possesses wartime OPCON. The wartime OPCON transfer was previously set for 2015 but was postponed, as the allies agreed in 2014 to a conditions-based handover due to Pyongyang's rising nuclear and missile threats.

In the SCM joint statement, the minister and secretary acknowledged the importance of preserving peace and security in the Taiwan Strait -- the first mention of the sensitive issue in the SCM, which analysts said signaled the expanding scope of the bilateral alliance to cover security far beyond the Korean Peninsula.

The Taiwan Strait was also mentioned in the joint statement issued at the close of the summit between Presidents Moon and Joe Biden in May.

"The two leaders reaffirmed the importance of the rules-based international order and adherence to international rules and norms, including those of freedom of navigation and overflight," the communique reads with no mention of China.

Regarding the mention of the Taiwan issue in the communique, a defense ministry official said later that it is just a repeat of what was written in the joint statement from the White House summit in May. The official asked media not to read too much into the related stipulation in the SCM document.

The SCM statement also emphasized the U.S.' commitment to maintaining the current level of 28,500 American troops in South Korea. Last year's version did not mention it amid tensions over the prolonged cost-sharing negotiations for the upkeep of the U.S. Forces Korea.

In the statement, the two defense chiefs also pledged to closely cooperate on the relocation of the allies' Combined Forces Command headquarters to Camp Humphreys in Pyeongtaek, 70 kilometers south of Seoul, by next year.

They also reaffirmed the plan for the return of parts of the U.S. military's Yongsan Garrison in the capital by early next year, a move likely to back a mega project to build a national park there.

They agreed to work together to promote closer cooperation in strategically crucial security domains of cyberspace and space. 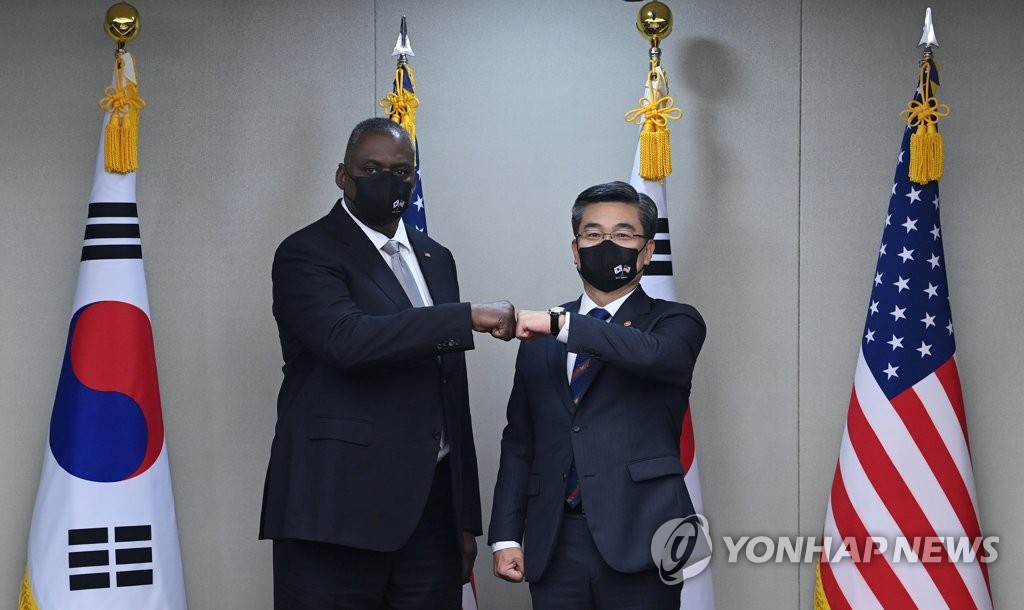