Defense Minister Suh Wook and his U.S. counterpart, Lloyd Austin, approved the Strategic Planning Guidance (SPG) to set the tone for the updating of existing war plans during their annual Security Consultative Meeting (SCM) in Seoul.

The session represented the first of its kind since the launch of the Joe Biden administration and the last under the government of President Moon Jae-in, who is to end his term in May next year. 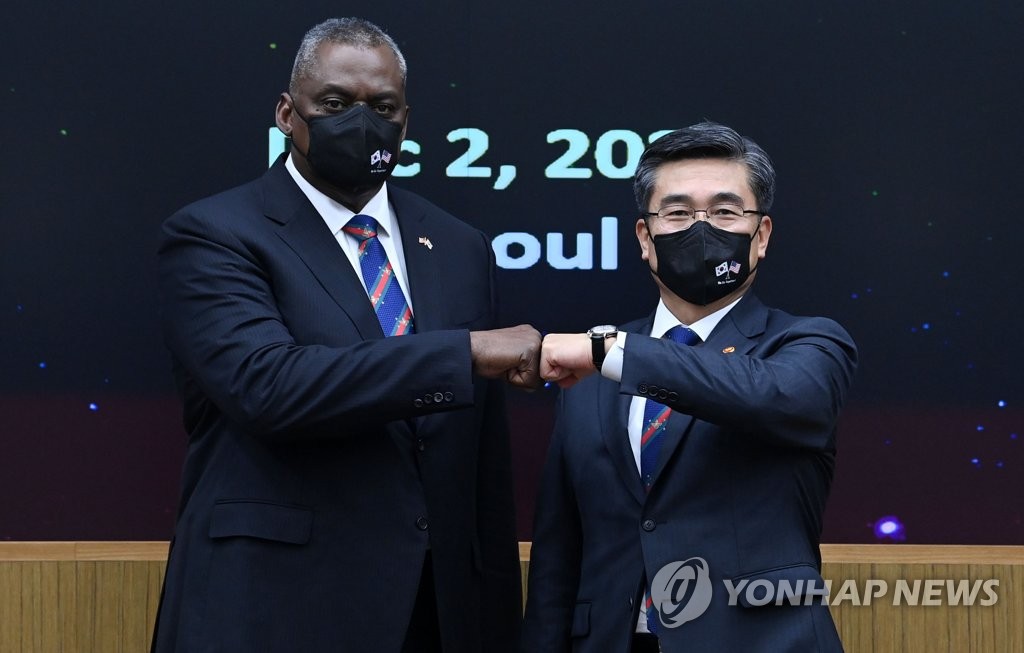 The signing of the new SPG, the first since 2010, comes as Seoul and Washington have been struggling to sharpen their responses to Pyongyang's push for formidable weapons, such as refined nuclear warheads, submarine-launched ballistic missiles (SLBMs) and a hypersonic one, which observers fear could chip away at the allies' defense posture.

The strategic guidance is designed to provide the allies' Military Committee, led by their Joint Chiefs of Staff chairmen, with authorization for new or updated war plans, which are to be written by the South Korea-U.S. Combined Forces Command (CFC).

The new SPG could likely reflect changes in the North's military capabilities, as well as shifts that both South Korea and the U.S. have made in their force realignments, defense doctrines and strategies to respond to the changing security environments on the Korean Peninsula and beyond, the analysts said.

"Over the last decade, North Korea has made strides in their nuclear and missile capabilities beyond our imagination, meaning some of the old (operational plans) have been rendered obsolete," Kim Yeol-su, senior fellow at the think tank Korea Institute for Military Affairs, said.

"It is fair to say that the fresh guidance itself sends a message to the North highlighting the allies' resolve to deter the North's nuclear and missile threats," Kim added.

Suh and Austin did not divulge details on the strategic guidance, but it is expected to pave the way for a major alteration to the current OPLAN 5015 (operational plan), which lays out a series of joint procedures to handle North Korea's potential aggression.

Written in 2015, OPLAN 5015 has supplanted the previous OPLAN 5027, which was known to stipulate the mobilization of some 690,000 U.S. troops and other military assets in the event of an all-out war in Korea.

Still, OPLAN 5015 needs improvements, as it is thought to center largely on responses to conventional warfare and relies on the large-scale U.S. troop augmentation -- now an unrealistic scenario given that Washington has been focusing on bolstering air and naval assets with less focus on ground operations, particularly for the Indo-Pacific theater, some analysts said.

The updated plans based on the latest strategic guidance are expected to specify a set of operational procedures to counter both nuclear and conventional attacks in a reflection of the fast-changing battle conditions, they noted.

"The strategic guidance would signal that the allies would write a war plan befitting the reality of North Korean nuclear threats," Park Won-gon, professor of North Korean studies at Ewha Womans University, said.

"In the past, the allies' war plans are known to cope separately with conventional and nuclear warfare, but an updated one would have to consider a scenario in which the North would use both nuclear and conventional assets in a contingency," he added.

The North's continued drive to advance its nuclear and missile capabilities has continued to weigh on military planners in Seoul and Washington.

Its launch of a hypersonic missile in September raised fears that the new asset, though not at a full development stage, could evade the allies' multilayered missile defense system.

The North's SLBM development in recent years also highlights its steady push to build capabilities for nuclear retaliatory attacks, or "second strike capabilities," which could potentially be employed to keep American forces at bay -- and thus undermine the credibility of the U.S. security commitments to South Korea.

ICBMs capable of striking the continental U.S. have posed a nettlesome security challenge to the allies, amid speculation that Washington might dither on coming to the defense of South Korea for fear that its homeland could become a target of North Korean nuclear strikes.

"In 2010, North Korea likely had little or no capability to attack the ROK with nuclear weapons. That is no longer the case," said Bruce Bennett, a senior defense researcher at the Rand Corp., a U.S.-based think tank.

Bennett also underscored the need for the allies to consider the North's focus on information and psychological operations.

"The ROK and the U.S. appear to not be recognizing this," he said, using the acronym for the South Korea's official name, the Republic of Korea. "The SPG needs to include a serious section on fighting the ongoing peacetime information battle."