Trading volume was moderate at about 478 million shares worth some 10.1 trillion won (US$8.6 billion), with gainers outnumbering losers 807 to 95. 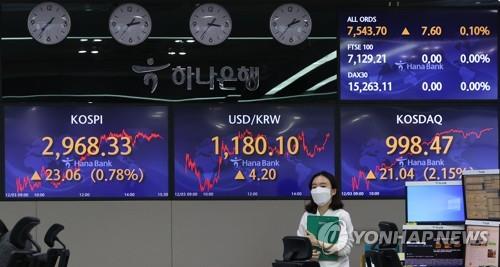 Trading started off choppy as health authorities strengthened virus curbs amid spiking cases and the potential spread of the highly contagious omicron variant of the coronavirus.

The government has decided to limit private gatherings to six people in the capital area and eight in other regions for four weeks, starting next week.

The country's new daily coronavirus cases fell below 5,000 on Friday, but the number of critically ill patients refreshed its record high.

"Foreigners had been sellers last month over the strong U.S. dollar currency and China risk, but now they are returning to scoop up local IT stocks," Samsung Securities analyst Jeong Myung-ji said.

The local currency closed at 1,180.1 won against the U.S. dollar, down 4.2 won from the previous session's close.

Bond prices, which move inversely to yields, closed lower. The yield on three-year Treasurys added 5.5 basis points to 1.900 percent, and the return on the benchmark five-year government bond rose 4.1 basis points to 2.027 percent.

(LEAD) Seoul stocks up for 3rd day on foreign buying

(LEAD) Seoul stocks up for 3rd day on foreign buying