(ATTN: UPDATES throughout with English-language report)
By Song Sang-ho

SEOUL, Dec. 7 (Yonhap) -- North Korean leader Kim Jong-un has presided over a gathering of military educators and called on them to nurture commanding officers to be "absolutely loyal" to the ruling Workers' Party, Pyongyang's state media reported Tuesday.

The party's Central Committee and Central Military Commission convened the gathering at the April 25 House of Culture in Pyongyang on Saturday and Sunday to make a "radical turn" in education projects in line with the "changing times," according to the North's Korean Central News Agency (KCNA).

"(Kim) underscored the need to prepare all the military educationists to be true soldiers immensely loyal to the idea and leadership of the party and to organize and provide the military education strictly guided by the party's idea, policy and method so as to bring up all the cadets to be commanding officers who remain absolutely loyal to the Party Central Committee," the KCNA reported.

Kim then called for concerted efforts to open a "period for new surge and leaping progress" for military educational revolution to ensure the "invincibility of our revolutionary forces."

During the gathering, there was not any reported mention of the North's nuclear force or of any particular country.

The gathering came as Kim has been seen as striving to strengthen national unity and tighten discipline among military personnel amid persistent economic woes caused by the COVID-19 pandemic and crippling economic sanctions.

It was attended by leading military education workers, senior officials from the General Political Bureau of the North's Korean People's Army and the General Staff and other related officials.

The latest meeting of military education workers is the country's eight such session and the second since Kim took power in late 2011. The last session took place in November 2015.

In July, Kim presided over a gathering of military commanders and political staff. 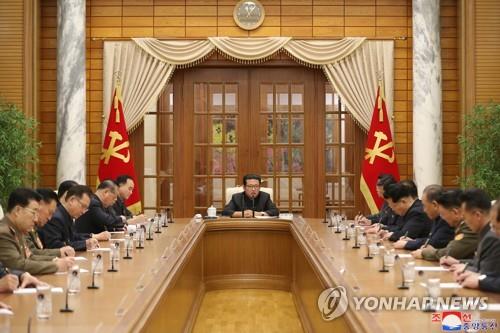