SEOUL, Dec. 7 (Yonhap) -- U.N. peacekeepers should be equipped with enhanced equipment and technologies to protect themselves and civilians from constantly changing threats and deliver their mandates of preventing conflict and promoting stability, a visiting senior U.N. official said.

Jean-Pierre Lacroix, head of the U.N. Department of Peacekeeping Operations, said the issue would be among top agenda items in this week's international forum hosted by South Korea, named the 2021 Seoul UN Peacekeeping Ministerial, which would mark the first of its kind to be held in Asia.

The two-day virtual conference to kick off Tuesday night (Seoul time) is setting the stage for member states to make their commitments relevant to the changing political and security environment as well as to emerging challenges from the COVID-19 pandemic and climate change, the under-secretary-general for peace operations said.

"The environment in which peacekeeping mission operate is becoming increasingly difficult and challenging and increasingly dangerous," Lacroix said Monday during an interview with Yonhap News Agency on a visit here to attend the forum. "One of the key achievements of that meeting will be to help peacekeeping missions and our peacekeepers on the field adapt to these new challenges." 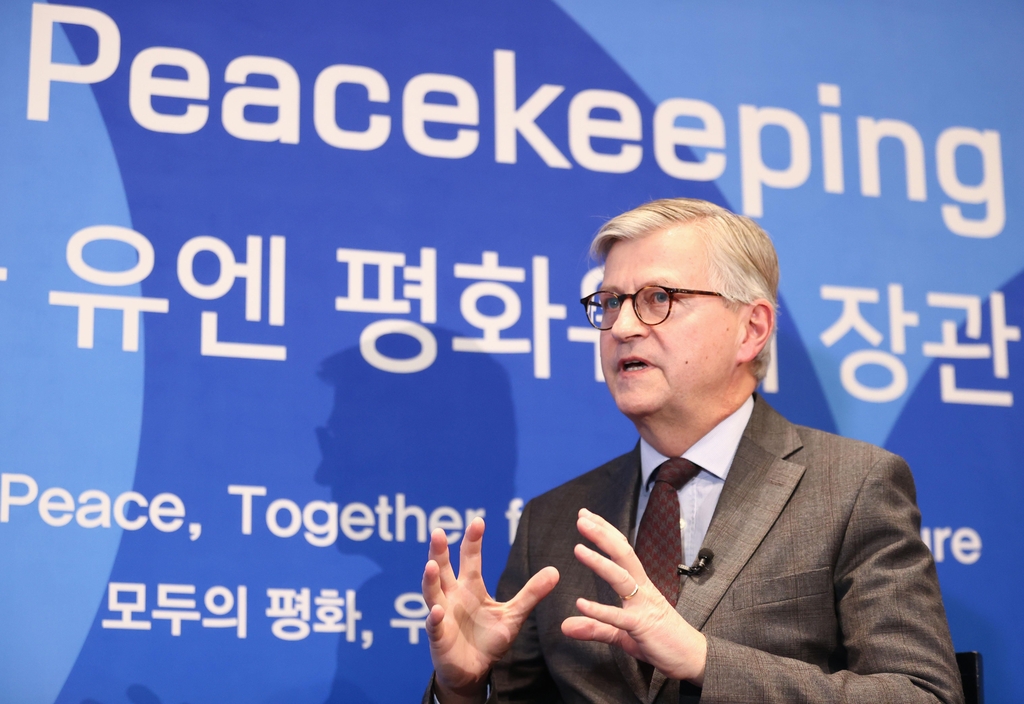 Foreign and defense ministers and other officials from more than 150 countries as well as those from related international organizations will join the gathering via video links, as it was hastily changed to virtual sessions last week due to concerns over the omicron variant.

Lacroix is one of three U.N. under-secretary-generals who will be participating in the conference in person and he will lead the fourth and last session titled "Protection of Civilians and Safety & Security" on Wednesday.

The French diplomat said he is "grateful" for South Korea's support and longstanding commitment to U.N. peacekeeping and believes it can further contribute with its advanced technology, health care capacity and military assets.

South Korea joined the U.N. in 1991 and deployed its first peacekeeping unit to Somalia in 1993. At present, a total of 569 troops are working as part of peacekeeping missions in five nations, including South Sudan and Lebanon.

He said Seoul's plan to provide helicopters to the U.N. will enhance peacekeepers' mobility in conflict-prone missions in Africa where peacekeepers are exposed to "nimble, unpredictable threats" and often grapple with lack of public transportation infrastructure.

"We need to be more mobile and flexible because the threats are very unpredictable and (they) can occur in many different places," he said, without naming countries. "Our peacekeepers need to intervene quickly to protect the population. Therefore, what we need for that is better means of transportation and helicopters (are) absolutely critical."

Lacroix said peacekeeping operations should embrace technologies to adapt to the changing environment, paying attention to a "smart camp" model to be proposed by South Korea, which envisions a highly connected camp based on latest digital technologies.

Enhancing medical infrastructure will also be high on the agenda during the meeting amid rising health risks for peacekeepers in fragile settings due to the prolonged pandemic.

The official said the COVID-19 pandemic has served as a "wake-up call" on the need to bolster preparedness and build a stronger partnership between member states for timely provision of medical support in the field.

"It reminded us that we have to be prepared to face the unpredictable," he said. "We have learned with COVID-19 that we also had to be very adaptable when it comes to medical support."

He added South Korea's hosting the event is meaningful as it coincides with the celebration of the 30th anniversary of becoming a U.N. member, hoping the meeting will be "effective" and "productive."

"It's very symbolic of the success of the Republic of Korea within the United Nations and the role that your country has been playing over the years in many areas that are important to the U.N.," he said, referring to South Korea's official name, the Republic of Korea.

It marks the first time for an Asian country to host the high-level PKO forum, which was launched in 2016 as a follow-up to the 2015 U.N. peacekeeping summit.