SEOUL, Dec. 10 (Yonhap) -- Lee Hong-jun (alias), an 80-year-old man living outside of Seoul, always finds it frustrating when he has to handle online banking via his mobile phone as he has trouble going through what seems to be endless and complicated digital procedures.

Having retired over 20 years ago, Lee now feels increasingly sidelined from ongoing innovation in the banking industry that has allowed people to do their banking with just a few touches on smartphones without visiting bank branches around the clock.

Living with his wife who is in her late 70s in Yangju, north of Seoul, he does not have many options to choose from: he has to either visit a bank branch or wait for days or weeks until he meets his daughter living in Seoul, hands over his cell phone and asks for transactions on his behalf.

"It has become quite a hassle to visit a bank office, which is not accessible by walking for my age," Lee said. "With concerns rising over the coronavirus and avoidance of in-person services at banks, I have no choice but to ask for my daughter's help whenever the need arises for bank-related affairs."

Lee is among a growing number of senior citizens having trouble keeping up with the transformation as banks are rushing to reduce their brick-and-mortar branches and to expand their mobile banking services to try to stay relevant amid the popularity of internet-only banks. 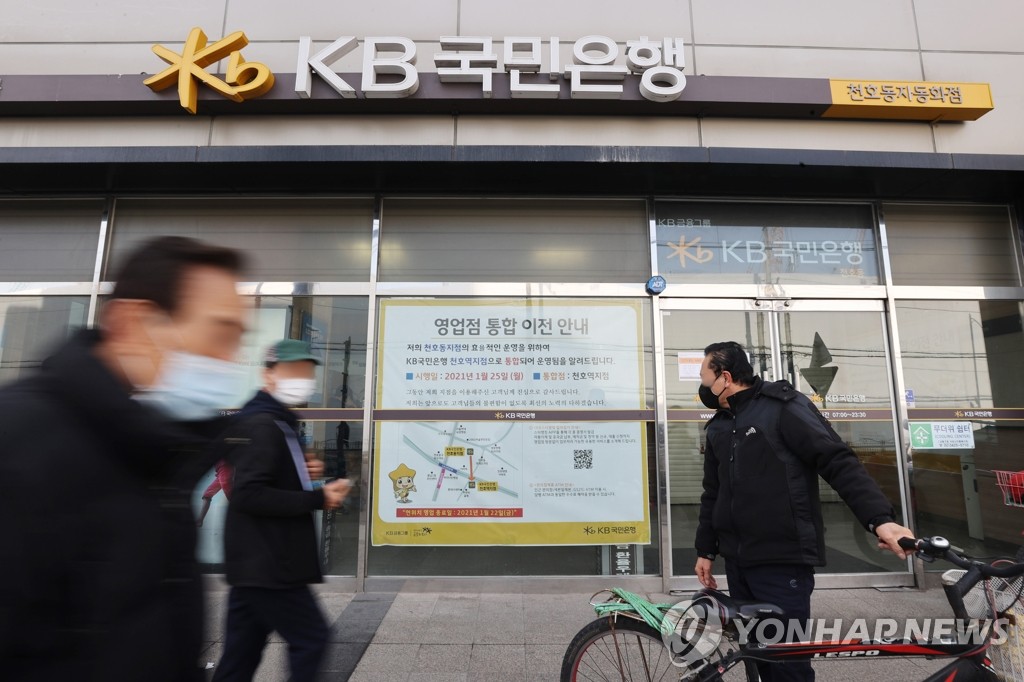 According to a report by the National Assembly Research Service based on data from the Financial Supervisory Service (FSS), the number of offline bank branches has been on the decline over the past few years, with the pace of branch reductions picking up speed since the outbreak of the coronavirus.

Banks have slashed the number of branches and employees in recent years in a move to cut costs amid fierce competition and falling profits.

Bank offices have been fast disappearing especially in the wake of the outbreak of the coronavirus in 2020. Compared with 23 and 57 offices closed or consolidated in 2018 and 2019, respectively, the number spiked to 304 in 2020 and is expected to reach 222 this year.

Banks have not just been rushing to reduce their office space but also to cut down on automatic teller machines in recent years. According to the FSS data, nearly 4,000 ATMs have disappeared across the country from late 2019 until August this year.

Behind the declines is the growing demand for contact-free services amid the global pandemic, coupled with the increasing use of mobile and internet banking among younger generations through smartphones or computers.

The transition to mobile banking has gained more traction with the emergence of internet-only banks, such as Kakao Bank and K-Bank, which offer their services around the clock without face-to-face contact with customers and without brick-and-mortar branches.

The unintended victims of the banking transformation are senior citizens who tend to favor visits to offline branches, in-person services and transactions based on cash over mobile and internet banking.

A 2019 survey by the Bank of Korea showed that those in their 70s or older used cash for 68.8 percent of financial transactions, which was 2.6 times higher than the average for all age groups.

The survey also said that about 54 percent of those senior people visited offline bank offices to withdraw money, which was two times larger than the average.

"As financial digitalization moves forward, the so-called digital alienation can worsen," the Korea Insurance Research Institute said in a report. "Declining local bank branches will have a much bigger impact on senior financial service consumers who favor in-person transactions more than internet or mobile-based ones." 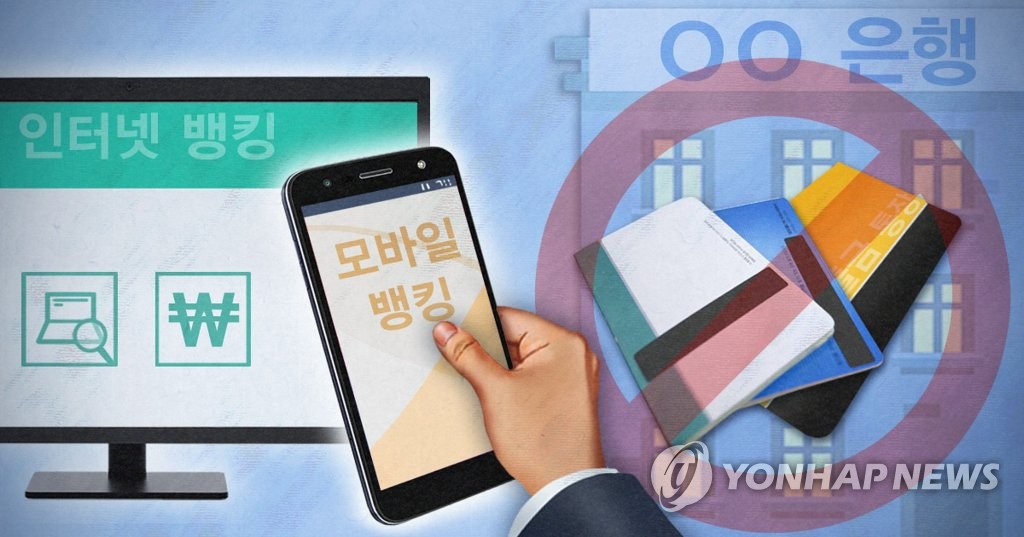 Last weekend, dozens of citizens gathered in front of a building in Nowon district, north of Seoul, voicing their opposition to a planned closure of a bank branch, as they worry about increasing inconvenience should the branch close and a kiosk take its position as planned.

"The reality is that senior citizens depend upon tellers at banks for such simple acts as savings and withdrawals of money," a 76-year-old resident was quoted as saying by the JoongAng Ilbo, a major local newspaper.

"If the bank suddenly disappears, things will get frustrating."

While trying to reduce offline space, banks are also working to ease inconvenience faced by senior people, though the efforts appear to be insufficient to take care of the looming problem for older people.

The idea of opening a joint office for multiple banks was recently floated but little progress has been made due to worries over leaks of business strategies and who should be held accountable for any problems.

Convenience stores have also been cited as a possible solution by allowing customers to handle their banking matters there, though relevant efforts still remain in the early stage.

Given that such infrastructure installation takes time before it can be used by many people, experts say it is more urgent to make efforts to educate senior citizens on mobile banking and fintech so that they are not marginalized further by digitalization.

Education on mobile and digital technology for senior people is also necessary to protect them from the danger of phishing and other types of online fraud, while improving user interfaces in a way that can be used more easily by less tech-savvy people.

Lee Ku-hyung, a researcher of the National Assembly Research Service, said financial authorities have failed to provide clear-cut alternatives or detailed action plans as efforts to run joint branches or joint ATMs remain in a limbo.

"We need to operate joint branches and build user interfaces senior and physically challenged people can easily use, along with education on finance," the researcher said.

Kang Hyung-gu, an official of the Korean Finance Consumer Federation, echoed the view of increasing education on finance for senior people.

"You don't get exposed to fraud when making financial transactions at banks," he said, adding that education on online transactions is necessary for senior citizens to help them carry out contact-free transactions without feeling any fear.