SEOUL, Dec. 9 (Yonhap) -- South Korea's new coronavirus cases stayed above 7,000 for the second consecutive day Thursday and the number of critically ill patients hit an all time-high amid waning immunity and colder weather.

The country confirmed 7,102 new COVID-19 infections, including 7,082 local infections, raising the total caseload to 496,584, according to the Korea Disease Control and Prevention Agency (KDCA).

The daily tally was slightly down from a daily record-high of 7,174 reported a day earlier, the KDCA said. 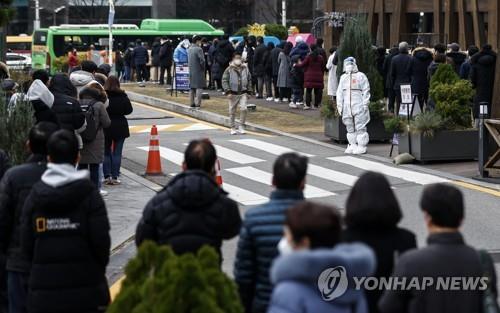 The number of critically ill COVID-19 patients jumped to a record high of 857, up from a previous daily high of 840 reported a day earlier, putting further strain on the country's already overwhelmed health care system.

The KDCA said 83.4 percent of critically ill COVID-19 patients are aged 60 or over.

The government reimposed stricter restrictions and implemented the "vaccine pass" on Monday to limit indoor gatherings and encourage more vaccinations in order to contain a surge in infections and the spread of the newly-emerging omicron variant. The measures will remain in effect until Jan. 2.

The authorities forecast the tightened measures to show effects starting later this week.

The KDCA said it has newly confirmed 22 omicron cases, raising the total caseload to 60. It marks the first time that the daily new cases surpassed 20.

Of the total cases on Thursday, Seoul reported 2,790 new cases, while 2,141 cases came from the surrounding Gyeonggi Province and 497 from Incheon, 40 kilometers west of Seoul.

The country reported 20 imported cases, raising the caseload to 15,976, the KDCA said.

The KDCA said 83.4 percent of the country's 52 million population have at least received one vaccine shot, while 80.8 percent have received two shots and 9.4 percent have gotten their booster shots.