SEOUL, Dec. 9 (Yonhap) -- The upcoming Hollywood blockbuster "Spider-Man: No Way Home" is expected to be a box office hit as it has already sold more than 220,000 tickets with six days left before its release in South Korea.

According to box office figures released by the Korean Film Council (KOFIC) on Thursday, the presales for the latest "Spider-Man" movie had come to 221,294 as of 4 p.m., two days after they began Tuesday.

The figure already outstripped the third-day advance ticket sales of any films released since South Korea reported its first COVID-19 case in January last year. It is also higher than those for 2018 Marvel superhero film "Avengers: Infinity War," one of the pre-pandemic hits in the country with a total audience of more than 11 million.

"No Way Home" accounted for 72.5 percent of all tickets reserved as of that time, overwhelming "Monsta X: The Dreaming" with 3.7 percent, "Dune" with 2.9 percent and "Don't Look Up" with 2.7 percent. 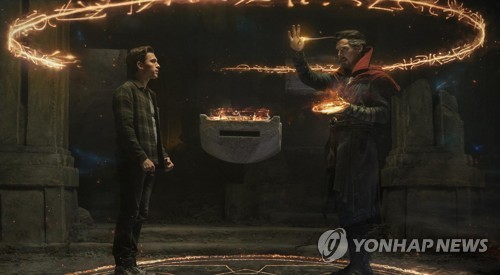 Starring Tom Holland, Zendaya, and Jacob Batalon, "No Way Home" is the last installment of the Marvel Cinematic Universe's "Spider-Man" trilogy following "Spider-Man: Homecoming" (2017) and "Spider-Man: Far From Home" (2019) and part of Phase Four of the MCU.

In the new film, Peter Parker (Holland) seeks help from Doctor Strange (Benedict Cumberbatch) to make the world forget his identity as Spider-Man. But Parker soon faces a whole new set of villains to confront as the multiverse opens up and allows villains from other universes to soar into Earth.

British actor Holland, who visited South Korea to promote the first and second Spider-Man films in the past, on Tuesday attended an online press conference with local media for the third movie. On Wednesday, he made a surprise appearance on the popular South Korean TV variety show "You Quiz on the Block."

Industry insiders say "No Way Home," when it opens in South Korean theaters next Wednesday, will easily shoot to the top of the box office still reeling from coronavirus-related restrictions.

The number of people watching movies at theaters has fallen to 60,000 to 80,000 a day since last weekend, according to figures from KOFIC, apparently due to lack of films getting a wide release this month and a recent surge in South Korea's daily coronavirus cases. 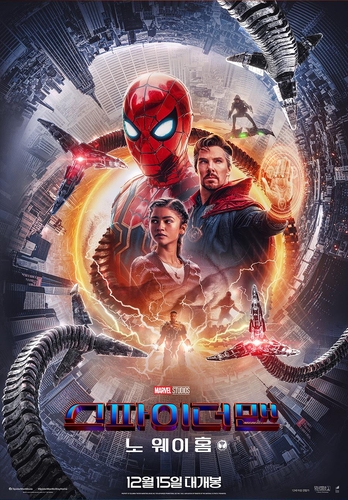