The Korea Hydrographic and Oceanographic Agency issued the warning earlier this week as the Joint Chiefs of Staff has a plan for "regular maritime firing drills" in waters south of Ulleung Island in the East Sea from Monday through Friday, according to the agency officials.

The agency said it informed Japan of the updated navigational warning on Thursday.

South Korea has been in effective control of the islets of Dokdo, with a small police detachment, since its liberation from Japanese colonial rule in 1945. Still, Japan repeatedly claims sovereignty to the rocky outcroppings.

Dokdo has long been a thorn in relations between the two countries, as demonstrated in the Japanese vice foreign minister's abrupt boycott of a joint press conference in Washington D.C. last month with his South Korean and American counterparts in protest over a rare visit to Dokdo by South Korea's police chief.

Formally, South Korea's military authorities have not announced any schedule for next week's exercise near Dokdo. A Navy official neither confirmed nor denied the report of the navigational warning, dismissing a view linking it with any drill to "defend" Dokdo. In June, the Navy staged a regular Dokdo defense exercise along with the Coast Guard.

Keen attention is being paid to whether the top South Korean and Japanese diplomats will hold separate bilateral talks or a trilateral meeting involving their U.S. counterpart during their visit to the British city of Liverpool this weekend for the Group of Seven (G-7) foreign ministerial talks. 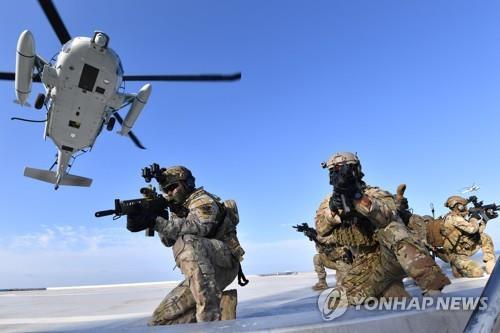