SEOUL, Dec. 10 (Yonhap) -- Top military officials of South Korea and the United States have met to discuss the possibility of conducting an assessment required for the envisioned transfer of wartime operational control (OPCON) earlier than the current plan of next fall, sources said Friday.

Joint Chiefs of Staff Chairman Gen. Won In-choul and Gen. Paul LaCamera, the head of the South Korea-U.S. Combined Forces Command (CFC), held closed-door talks Thursday to discuss the timing of the full operational capability (FOC) assessment, the second part of a three-phase program to verify if South Korea is ready to lead the allies' combined forces, the sources said. 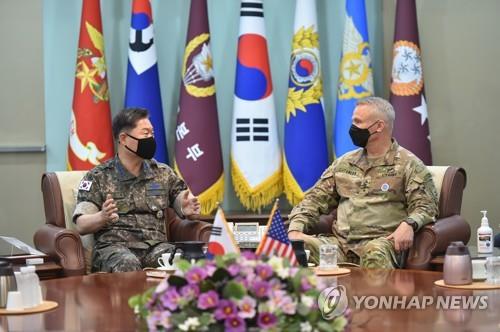 The meeting came a week after U.S. Defense Secretary Lloyd Austin reportedly agreed to consider advancing the timing for the FOC assessment during a courtesy call on President Moon Jae-in in Seoul.

During their annual security talks here last Thursday, Defense Minister Suh Wook and Austin agreed to conduct the assessment next fall, though Seoul has apparently sought more progress in the OPCON transition process before the term of the Moon administration ends in May.

During the meeting with LaCamera, Won was expected to reiterate Seoul's hope to conduct the FOC assessment in the first half of next year.

"I understand Commander LaCamera listened to Won's view, and there may be more meetings between them going forward," a source said on condition of anonymity.

The allies completed the initial operational capability assessment, the first part of the verification program, in 2019.

The FOC assessment has been delayed due in part to the COVID-19 pandemic. But last week's bilateral agreement to fix the year for the FOC assessment raised hopes that the overall OPCON transfer process will pick up pace.