(ATTN: UPDATES with more details in paras 3-4)
By Song Sang-ho

SEOUL, Dec. 10 (Yonhap) -- South Korea's Vice Chief of Naval Operations Vice Adm. Kim Jung-soo will be promoted to admiral and serve as top commander of the Navy as part of a regular reshuffle of generals and admirals, the defense ministry said Friday.

Kim, 59, will replace Adm. Boo Suk-jong, who has led the Navy since April last year, in what is expected to be the last senior-level shakeup under the Moon Jae-in administration whose term is set to end in May.

President Moon Jae-in plans to officially appoint Kim as the new chief of naval operations after a Cabinet deliberation on his appointment slated for Tuesday, the ministry said.

"Well versed in defense policy and force management, Kim is an admiral with strategic knowledge and capabilities for situational judgment and crisis management," the ministry said in a press release.

When he officially takes office, Kim is expected to face a set of major tasks, including pushing for the Navy's long-cherished project to secure a light aircraft carrier by 2033 to bolster maritime defense on the Korean Peninsula and beyond.

Commissioned as an ensign in 1987, Kim has served in various naval positions, including the commander of the Maritime Task Flotilla Seven and the deputy chief of naval operations for planning and management. 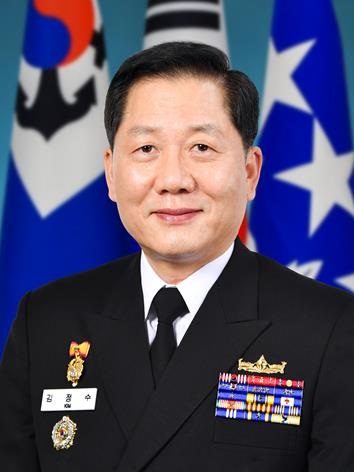