SEOUL, Dec. 10 (Yonhap) -- Lee Jae-myung, the presidential nominee of the ruling Democratic Party (DP), called on the main opposition People Power Party (PPP) on Friday to agree to immediately execute its own proposal to spend 100 trillion won (US$85 billion) on compensating small businesses hit by the pandemic.

Lee suggested the rival parties jointly pass a supplementary budget through a provisional session of the National Assembly this month to fund the payments.

"When it comes to people's livelihoods, there is no ruling and opposition party or progressive and conservative camp," he told reporters during a visit to Gyeongju, 371 kilometers southeast of Seoul.

"Since the opposition has raised the issue of providing 100 trillion won in support, rather than making empty promises that they will do something once they are elected, we should immediately do the things we can," he said. 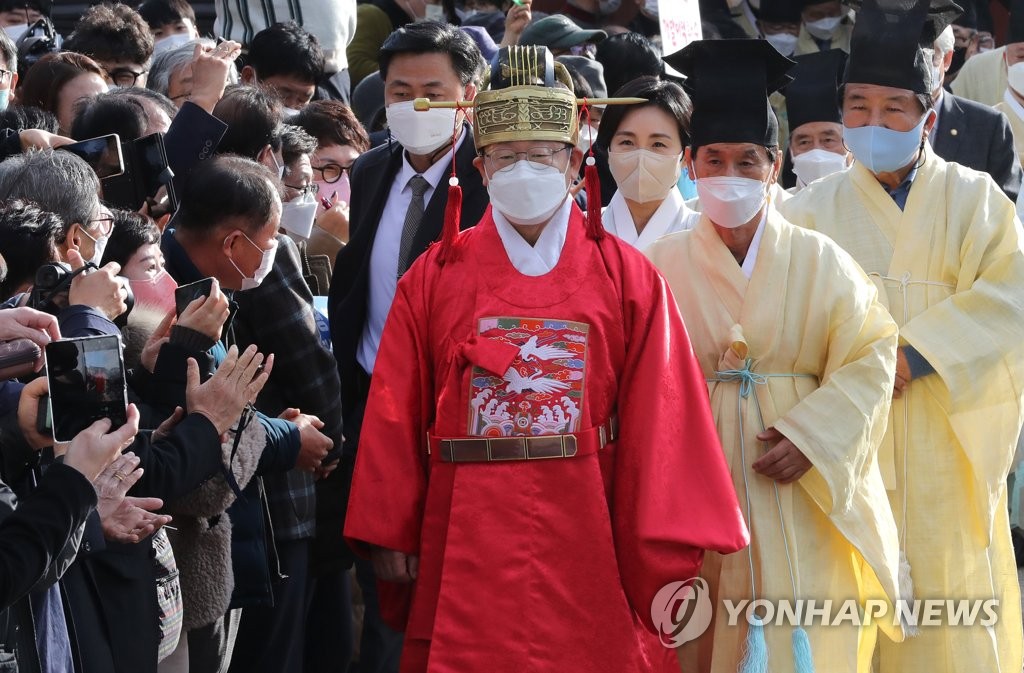 The rival parties have made COVID-19 relief a priority issue during their campaigns, with both sides making pledges to help people out of their economic difficulties.

The DP welcomed the idea and offered to hold talks, but Kim declined, saying his proposal was not up for negotiation with the ruling party.

"Even with 100 trillion won, we'll still be behind the average relief funds given by other countries," Lee said. "The 100 trillion won assistance project is a barometer, a litmus test of the sincerity of the PPP and Yoon Suk-yeol's campaign."

Lee said he has already begun making preparations by instructing his party to call a provisional session of the Assembly, consult with the government and review the best options to provide support.

The PPP retorted that if Lee is sincere, he should first persuade the government.

"(The DP) should not be looking for the opposition party, but for the Ministry of Economy and Finance," Rep. Kim Eun-hye, a party spokeswoman, said, claiming the PPP has asked for 100 trillion won since last year's general elections.

"The ruling party should reflect on itself for the irresponsibility in not having done anything until now," she added.