SEOUL, Dec. 13 (Yonhap) -- South Korea's top diplomat highlighted Seoul's commitment to a greater role in building a resilient global supply chain and cooperating with major economies in infrastructure projects in the Indo-Pacific region during a recent meeting of Group of Seven held in Britain, his office said Monday.

Foreign Minister Chung Eui-yong attended G-7 Foreign and Development Ministers' Meeting held in Liverpool over the weekend as a guest, along with representatives from Australia, India, South Africa and members of the Association of Southeast Asian Nations.

Chung called on the other participating ministers to coordinate responses to restore the global supply chain affected by the COVID-19 pandemic and expand investment in infrastructure projects in the Indo-Pacific region, his ministry said.

He briefed them on the Seoul government's efforts to promote "open society" against challenges at home and abroad with an "inclusive" and "balanced" approach, while expressing concerns over human rights violations against women in Myanmar and Afghanistan. On the sidelines over the gathering, Chung has held separate talks with his counterparts from Britain, Germany, Canada, the Philippines and Australia, and briefly met with foreign ministers from the United States and Japan, the ministry said.

Chung met with his British counterpart Liz Truss and agreed to collaborate in major infrastructure projects in developing nations and step up partnership in digital technologies.

Britain holds the rotating presidency of the G-7 sessions this year, and Germany will be the next chair.

Chung also sat down with the Philippine foreign minister Teodoro Locsin Jr. to deepen bilateral economic ties in such areas as railway infrastructure and defense sectors.

They acknowledged the need to quicken the process to officially sign their free trade agreement, which was concluded in October, to lower trade barriers. It needs a parliamentary ratification in the respective nations.

He met with his Canadian counterpart Melanie Joly for the first time since her joining Prime Minister Justin Trudeau's new Cabinet in October to talk on cooperation on the Indo-Pacific region and COVID-19 response.

In addition, Chung had a "pull-aside" meeting with his Australian counterpart Marie Payne to strengthen bilateral ties as the two countries are set to upgrade their relations to a "comprehensive strategic relationship" in the wake of South Korean President Moon Jae-in's state-visit to Australia this week.

The two top diplomats agreed to expand strategic partnership in trade, carbon neutrality and key raw materials among others. 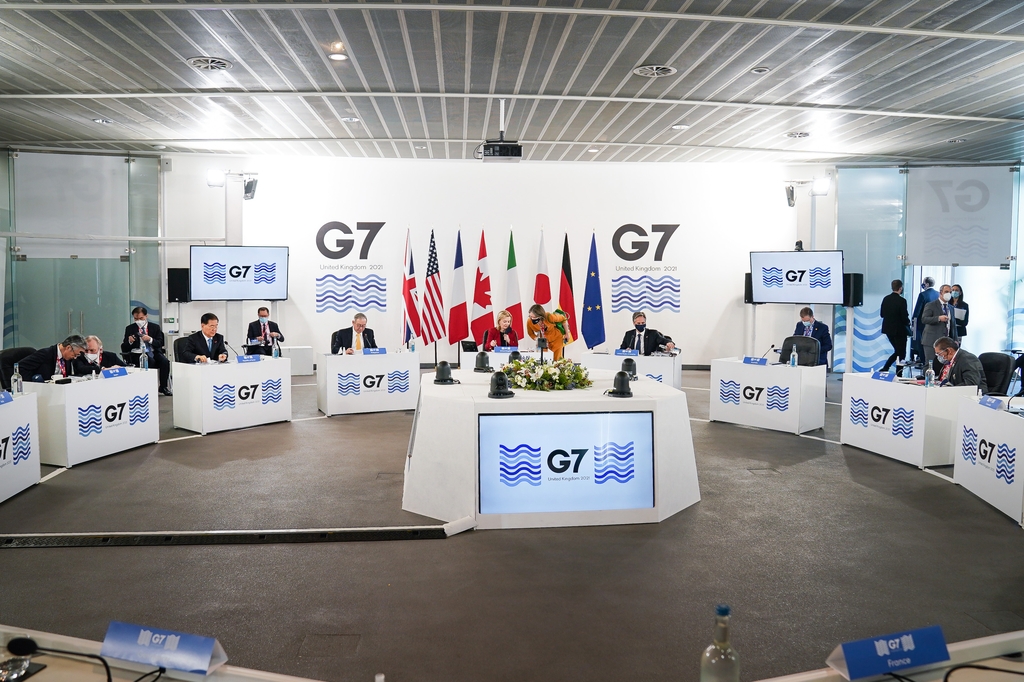 While Chung didn't separately held a meeting with U.S. Secretary of State Antony Blinken, the two had private discussions on the margins of the Saturday reception and working sessions on Sunday, according to Seoul officials.

"The two ministers exchanged their opinions about mutual interests on the Korean Peninsula, Northeast Asia and the Middle East, and discussed ways to expand the bilateral cooperation," the ministry said in a press release.

He also briefly met with his Japanese counterpart Yoshimasa Hayashi for the first time since Hayashi's inauguration last month as part of efforts to improve strained bilateral ties over history-related issues, and the two diplomats agreed to expand communications via diplomatic channels, it added.