The male protester threw two eggs at Lee from across a road while the candidate was heading toward a fruit farm in the county, 217 kilometers southeast of Seoul, as part of his campaign in the region.

Lee was not hit, but a bodyguard and Rep. Han Jun-ho were hit by pieces of an egg. The incident caused a minor scuffle between the man and police, according to officials.

The man, presumably in his 30s, was immediately overpowered by police at the scene. He identified himself as an "activist" against the THAAD base in the farming town.

"The DP-controlled government and Mr. Lee Jae-myung in the past promised to remove THAAD, but they haven't done it," the man said. "Why did you not remove THAAD?," he added.

Lee's campaign spokesperson said the man is believed to be a resident near the THAAD base. The camp will ask for leniency for the man, she said.

Residents of Seongju have long opposed the THAAD base in their town, resulting in clashes with police every time the government brings construction equipment and other items into the base.

As an integral part of the U.S.-led missile defense system, the Terminal High Altitude Area Defense system (THAAD) is designed to shoot down short-, medium- and intermediate-range ballistic missiles at a high altitude in their terminal phase, using a hit-to-kill method. 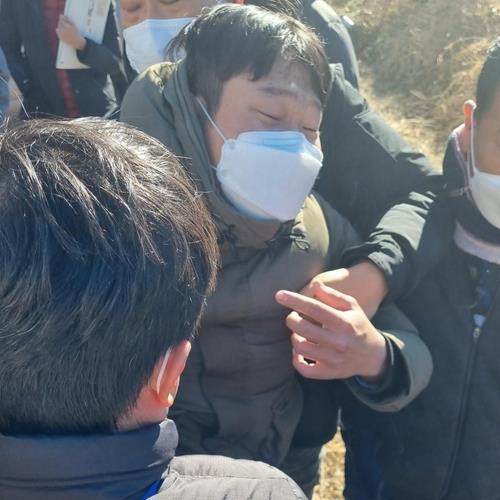