SEOUL, Dec. 13 (Yonhap) -- Police have again come under fire for their inadequate handling of a recent stalking case, which eventually led to one death and one serious injury in Seoul.

A ranking official of the National Police Agency (NPA) on Monday admitted apparent misjudgment by a local police station, which failed on Tuesday of last week to detain a stalker accused of abducting and sexually assaulting his former girlfriend for unclear reasons. 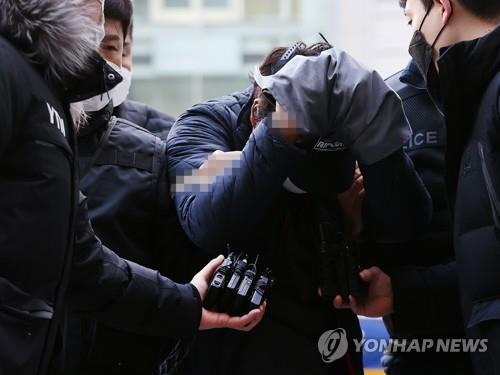 The 26-year-old stalker, identified by his surname Lee, was only arrested Friday soon after killing his former girlfriend's mother and seriously injuring her younger brother at their home in southern Seoul.

The case dates back to last Monday, when the stalking victim's father called police to say his daughter went missing and appeared to be abducted by Lee.

The two were later found in Daegu, about 300 kilometers southeast of Seoul, and Lee was accused of abduction and sexual assault. But a Daegu police station on Tuesday decided not to put Lee under emergency arrest allegedly due to clashing testimonies by the two. Instead the woman was placed on a police protection list and given a smartwatch that could be used to quickly alert the police in an emergency on the day.

Three days later, however, Lee visited the stalking victim's home in an apparent retaliation for her family's police report, and stabbed her mother and brother. Her father was not at home at that time.

The NPA official explained there was no urgency to detain Lee in Daegu last week, as he voluntarily went to the police station and surrendered his mobile phone.

"Emergency arrests should be made in consideration of urgency, reasonableness and seriousness. (Lee) may have not been put under emergency arrest because the case didn't meet the requirements," the official said, noting police were previously accused of abuse of authority many times due to emergency arrests.

NPA chief Kim Chang-yong offered an apology to the stalking victim and her family, saying he feels sorry for the deceased and injured people. He then vowed to take all possible countermeasures to enhance people's safety.

In late November, police drew fire for their inadequate responses in connection with the death of a stalking victim under police protection and an alleged dereliction of duty by two Incheon officers accused of failing to properly handle a knife attack.