(ATTN: UPDATES throughout with details; ADDS byline)
By Choi Soo-hyang

SEOUL, Dec. 15 (Yonhap) -- Kim Yong-ju, a younger brother of North Korea's late founder Kim Il-sung and once a powerful official of the regime, has died, according to Pyongyang's state media Wednesday.

The North's leader Kim Jong-un sent a wreath the previous day to express condolences over his death, the Korean Central News Agency (KCNA) said. His death at the age of 101 came as the leader marks the 10th anniversary this month of seizing power in a hereditary succession.

Kim Yong-ju was a former honorary vice chairman of the standing committee of the North's rubber-stamp Supreme People's Assembly, and a winner of the Order of Kim ll-sung and the Order of Kim Jong-il, the report said, without giving further details, such as when he died.

Born in 1920, he was the head of the ruling party's influential organization and guidance department in the Kim Il-sung era but was replaced by his nephew Kim Jong-il in 1973. He had since been effectively erased from the North's political scene for around two decades.

In 1993, Kim returned to the ruling party as a member of the politburo and vice president of the country after Kim Jong-il solidified his grip on power as the North's next leader. Kim Jong-il ruled the reclusive North after the death of his father in 1994 until 2011.

"Kim Yong-ju devotedly struggled to implement the Party's lines and policies and made a contribution to accelerating socialist construction and developing the Korean-style state social system, while working at important posts of the Party and the state for many years," the KCNA said.

Kim Yong-ju last appeared in the North's state media in 2015, seen bowing to photos of the North's former leaders after casting a vote at a local election. 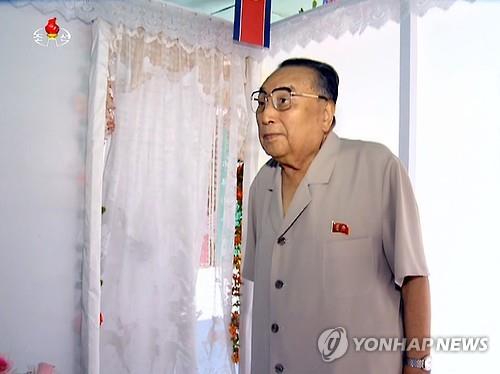