SEOUL, Dec. 15 (Yonhap) -- A senior U.S. diplomat in charge of economic and trade policy arrived in South Korea on Wednesday for a three-day visit, during which he said he would discuss ways to enhance economic ties between the two allies.

Jose W. Fernandez, U.S. undersecretary of state for economic growth, energy and the environment, landed at Incheon International Airport from Tokyo in his first regional trip since taking office in August.

Fernandez told Yonhap News Agency that South Korea and the U.S. have good relations in economy and politics, and his trip aims to find ways to further deepen bilateral ties. 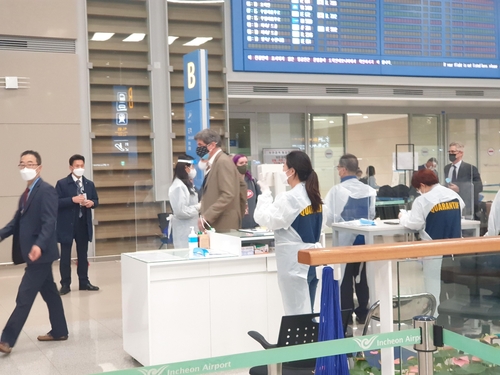 During the visit, he will meet with a number of government officials and industry figures, including those from companies investing in the U.S., he added.

According to Seoul officials, the undersecretary is scheduled to give a speech at a forum on bilateral economic cooperation Thursday morning and meet with officials from the finance and trade ministries later in the day.

On Friday, he is expected to meet with Second Vice Foreign Minister Choi Jong-moon for the sixth annual Senior Economic Dialogue, which is expected to delve into economic cooperation on a range of areas, including global supply chains, infrastructure, COVID-19 vaccines, climate change and energy.