SEOUL, Dec. 16 (Yonhap) -- The private-sector proportion of North Korea's economy has steadily been on the rise over the last decade since leader Kim Jong-un took power, Seoul's unification ministry said Thursday, in a sign of the country's continued marketization.

Citing surveys of North Korean defectors, the ministry said that more North Korean people have engaged in private economic activities under Kim's leadership in a division of the country's economy that had been controlled predominantly by the state.

The country's trend toward marketization came as people have turned to private marketplaces, known as jangmadang, apparently after they were deprived of state benefits such as food rationing amid its deepening economic woes, observers said.

Among 740 North Korean defectors who left their homeland between 2016 and 2020, 37.6 percent said they made a living from private economic activities, up from 27.7 percent tallied from those who left the North between 2006 and 2010.

The number of respondents who said they earned money at state-run workplaces such as farms and factories dropped from 28.4 percent to 24.7 percent during the cited period.

"The data shows marketization is continuing under the Kim Jong-un regime. The economy is continuing to show dual elements of state-run and private activities," a ministry official said.

The North's economy, meanwhile, shrank 4.5 percent last year, apparently due to the COVID-19 pandemic and crippling sanctions amid little progress in nuclear negotiations.

"The North appears to be managing to maintain the status quo to a certain extent, but it's about time for the North to come up with a new economic strategy beyond self-reliance for a sustainable growth and improvement in people's livelihoods," another official said. 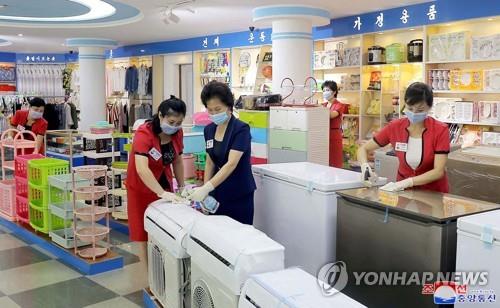