SEOUL, Dec. 16 (Yonhap) -- The director of the upcoming JTBC drama "Snowdrop" downplayed allegations of the show's historical inaccuracies Thursday, saying everything in the drama except for its time setting is basically fictional.

"The drama is set in the year 1987, but, except for situations like the country being under the reign of a military regime and electing a president at that time, all other things, like its characters and institutions, are fictitious," Jo Hyun-tak said during an online press conference to promote the show.

Set in Seoul in that year, the 16-part series depicts a romance between Su-ho (Jung Hae-in), an elite university student activist who abruptly rushes into a female dormitory of the university covered in blood, and Young-ro (Jisoo of K-pop girl group BLACKPINK), a female student who hides and treats him in the midst of chaos. 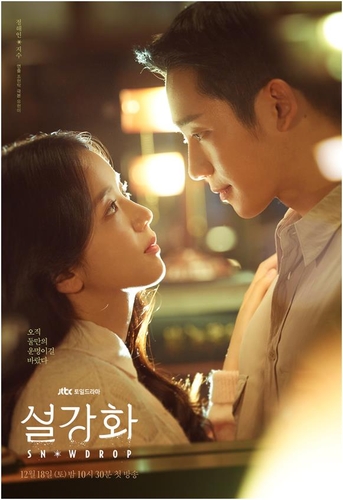 But since part of its synopsis and descriptions of its main characters were leaked in April, the drama has been mired in controversy that its script disparages South Korea's pro-democracy movement and beautifies the state intelligence agency accused of abusing its mighty power to suppress political dissidents and pro-democracy activists under military regimes from the 1960s to 1980s.

"I don't think there's as much of that as you think, because both I and the writers are working with a great sense of responsibility and mission," the director said. "Since the show will go on air soon, please watch it in person and check out those parts."

Jo said the drama project began in 2008 when its writer, Yoo Hyun-mi, wrote a screenplay inspired by a memoir of a North Korean defector from a political prison camp.

He, however, stressed the writer's use of North Korea as its subject matter is not for any political or ideological purposes, but for building the main characters. 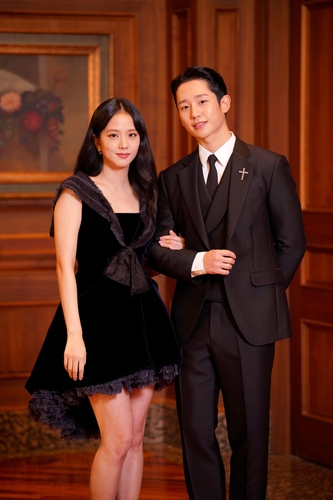 The upcoming series is also getting attention from K-pop fans for being the acting debut of Jisoo, a member of popular girl group BLACKPINK.

"Since this was my first time, I was nervous and thrilled," the singer said during a press conference. "But when I went into the scene, I felt like I became Young-ro, and everyone took good care of me, so I enjoyed filming."

Jisoo said she learned a lot from her character, who always brings positive energy to people around her even though her life has been far from smooth sailing.

Actor Jung Hae-in said his character, Su-ho, is a man who changes slowly after meeting Young-ro and learns the feeling of love.

He then raised expectations for action acting in the drama, saying, "Because I have a lot of action scenes, I worked out hard to perfectly prepare myself for them."

The drama series will premier simultaneously on JTBC and global streaming service Disney+ on Saturday at 10:30 p.m.

'Snowdrop' is period melodrama with all fictional settings: director

'Snowdrop' is period melodrama with all fictional settings: director