The government's latest projection is higher than the 3 percent growth forecast made in June, according to the Ministry of Economy and Finance.

The ministry's outlook is more upbeat than the 3 percent growth estimates by the Bank of Korea (BOK) and the Organization for Economic Cooperation and Development (OECD). The International Monetary Fund expects the South Korea economy to grow 3.3 percent next year.

The government lowered this year's economic growth forecast to 4 percent from 4.2 percent. 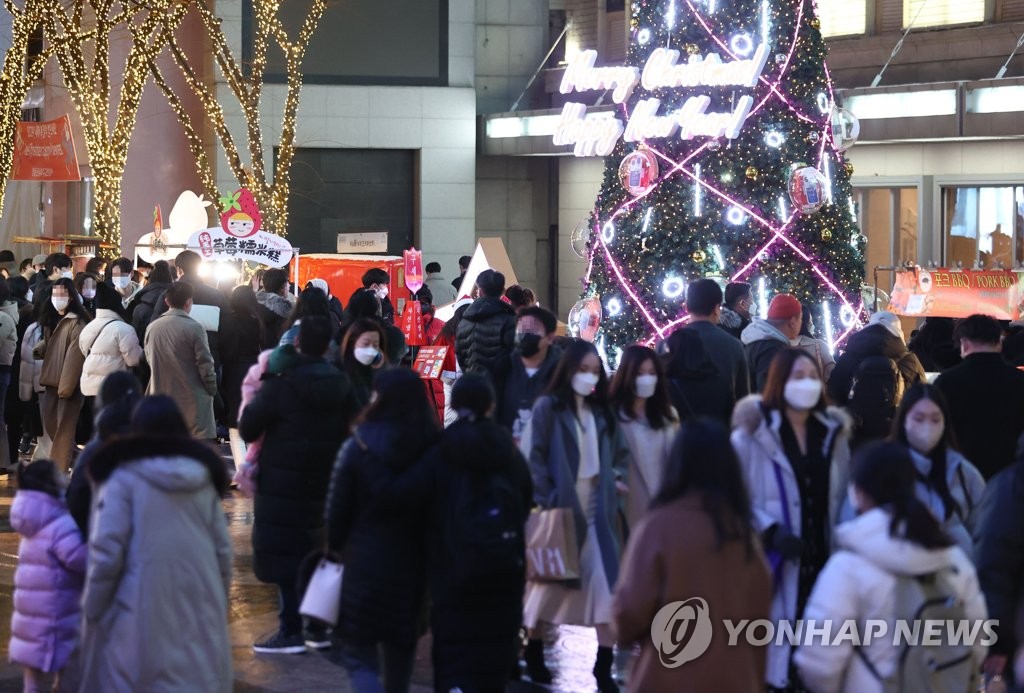 "The South Korean economy is expected to extend its robust recovery momentum into next year. Domestic demand and exports will likely post balanced growth, helping the economy get back on normal track at a faster pace," First Vice Finance Minister Lee Eog-weon said at a press briefing on Friday.

Asia's fourth-largest economy is on a recovery path on the back of robust exports of chips and autos. But it faces growing downside risks as the latest upsurge in COVID-19 cases and the spread of the omicron variant are casting a cloud over the recovery of private spending.

The country is grappling with the spike in virus infections since it relaxed virus curbs in November under the "living with COVID-19" scheme. Health authorities reimposed tougher antivirus measures on Saturday to contain the pandemic.

Despite the raging pandemic, the ministry expects private spending to grow 3.8 percent next year after its estimated growth of 3.5 percent this year.

The recovery of private spending will be evident next year on improving consumer sentiment and efforts to gradually return to normal life, but virus situations will still be a major risk factor, it said.

The finance ministry said it plans to maintain expansionary fiscal policy next year, with the aim of frontloading 63 percent of its planned spending in the first half.

"The spread of the omicron is expected to increase (economic) uncertainty in early next year .... That's why we set the 2022 frontloading rate at 63 percent, the same as this year, due to the need to prop up the economy in the first half," Finance Minister Hong Nam-ki told a press briefing.

He said the government is not considering creating another round of extra budget, as it placed its priority on swiftly implementing next year's national budget. Earlier this month, the National Assembly passed a record 607.7 trillion won (US$509.8 billion) budget for next year.

The government will also run a special travel week in the first half and provide discount programs on transportation, accommodations and amusement parks.

The country plans to abolish the $5,000 duty-free item purchase limit for outbound travelers with Korean nationality. The removal comes three years after the government raised the threshold from $3,000 in 2019.

In regard to exports, the government expects overseas shipments to remain robust next year though the growth pace will slow due to the base effect.

Overseas shipments, which account for half of the country's economy, are forecast to grow 2 percent next year, slowing from the estimated growth of 25.2 percent this year.

The government said it set the annual target of exports at around $660 billion for next year. The country's exports are set to hit a record high this year to exceed $640 billion. 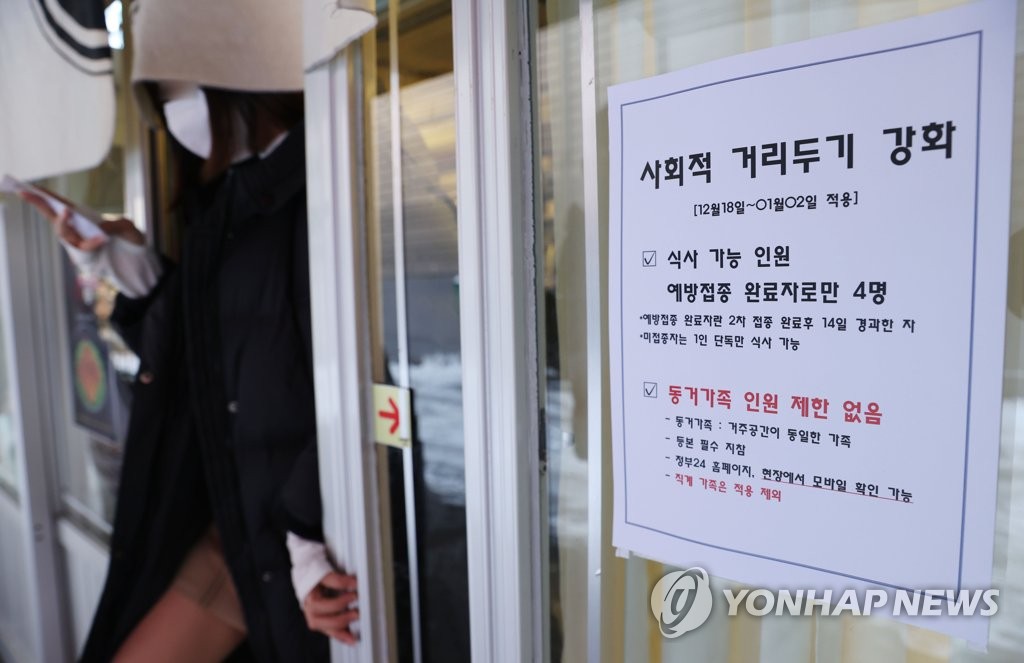 On inflation, the ministry sharply revised up its 2022 outlook to 2.2 percent from its earlier estimate of 1.4 percent The government's 2021 inflation forecast was also raised to 2.4 percent from 1.8 percent.

The government's 2021 and 2022 inflation forecasts are higher than the BOK's 2.3 percent and 2 percent projections, respectively.

South Korea faces a build-up in inflationary pressure due largely to high prices of oil and farm products and the economic recovery.

On the supply side, upward pressure from energy costs and prices of farm products may ease, but uncertainty about global supply chain bottlenecks lingers, the ministry said.

"In line with the recovery of domestic demand, demand-pull pressure is expected to increase. As demand for in-person services is forecast to make a fast rebound, the price growth of personal services will likely pick up," it added.

The ministry said the country plans to freeze electricity and gas bills in the first quarter in a bid to help ease inflationary pressure.

The government said it will pump up efforts to support small merchants hit hard by the pandemic and strengthen the social safety net to address the deepening social polarization.

The country plans to swiftly provide compensation to merchants who have suffered business losses due to the state antivirus measures. The government will set aside 3.2 trillion won in budget for the loss compensation scheme for next year. 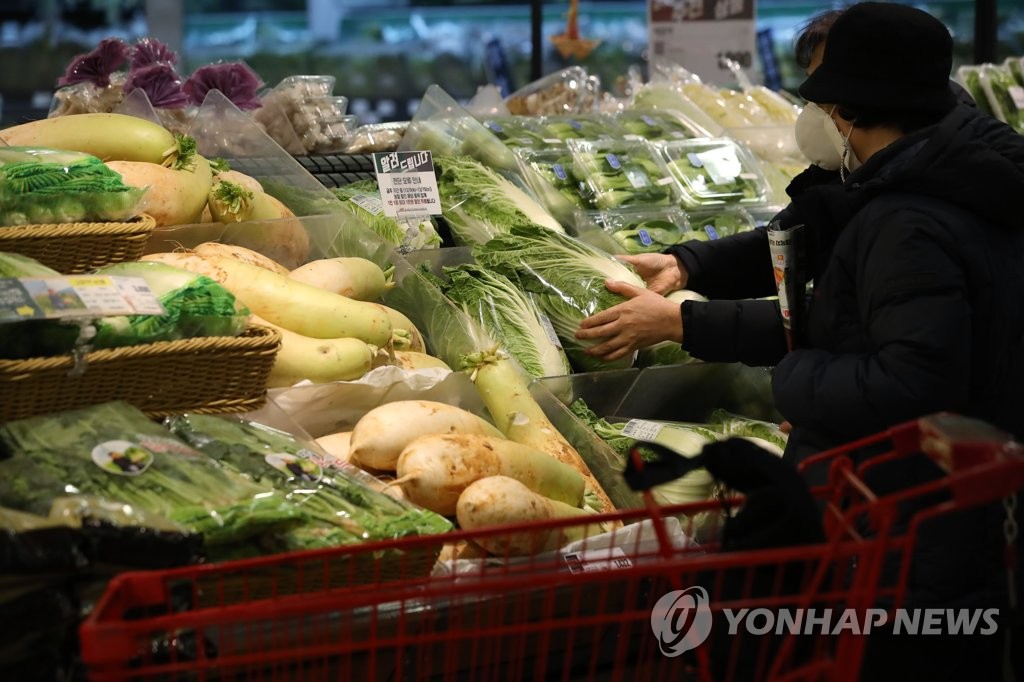