INCHEON, Dec. 20 (Yonhap) -- Two equestrian horses that had escaped from their stable in Incheon were caught on a nearby overpass Monday after being on the loose apparently for hours, police said.

Police said they received a sighting report of the two horses roaming free on the overpass in Namdong Ward of Incheon, 40 kilometers west of Seoul, at around 5:30 a.m. apparently headed toward a nearby highway.

Authorities closed off part of the overpass and captured the horses after about two hours. The horses reportedly escaped from an equestrian center near Incheon Grand Park and were believed to have wandered approximately 1 kilometer along the road.

"The horses were returned by stable managers, and no damage was reported," an official said. 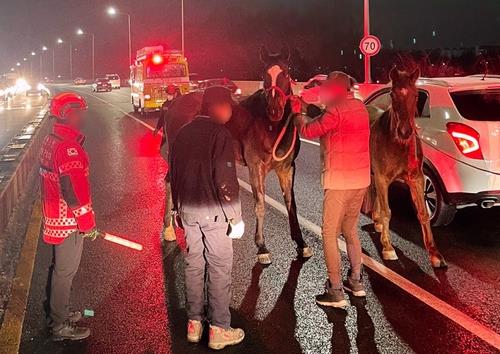