SEOUL, Dec. 21 (Yonhap) -- The number of South Korean workers who took time off to take care of their children rose 3.7 percent in 2020 from a year earlier amid more government support for parental leave, government data showed Tuesday.

A total of 169,345 workers took parental leave to take care of their children last year, up 6,089 from the previous year, according to the preliminary data from Statistics Korea.

Women accounted for 77.3 percent of the workers on parental leave, far outnumbering their male counterparts.

Yet the percentage of male workers was 19.6 times more than a decade earlier, and the number of women who took maternity leave rose 1.8 times over the cited period. 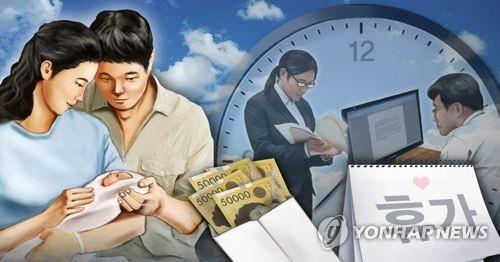 By law, people whose children are younger than eight, or below the second grade of elementary school, are entitled to apply for a maximum one year of maternity or paternity leave.

The government provides financial support for subscribers to employment insurance who also sign up for parental leave, which is aimed at tackling the country's ultra-low birth rate.

The data showed 24.2 percent of parents whose babies were born in 2020 took parental leave, up 1.2 percentage points from the previous year. The comparable ratio was 11.9 percent 10 years earlier.

The data also showed 63.5 percent of workers who took parental leave in 2020 working for companies with a workforce of 300 or more, indicating that the system has become well rooted among midsized firms and conglomerates. The ratio was down 1.6 percentage points from a year earlier.

By industry, employees working in the manufacturing sector accounted for 53.7 percent of fathers who took such leave. Among mothers, those working in the public health and welfare segment took up the largest share at 46.6 percent.
(END)

Number of workers taking parental leave up 3.7 pct in 2020

Number of workers taking parental leave up 3.7 pct in 2020