SEOUL, Dec. 21 (Yonhap) -- The senior presidential secretary for civil affairs resigned Tuesday after his son was found to have used his father's name on job applications.

Kim Jin-kook tendered his resignation as soon as he arrived at work Tuesday, and President Moon Jae-in immediately accepted the offer, a senior Cheong Wa Dae official told reporters on condition of anonymity.

Local broadcaster MBC reported Monday that Kim's son wrote on multiple job applications that his father is the senior secretary for civil affairs and would help the companies if they hired the son. 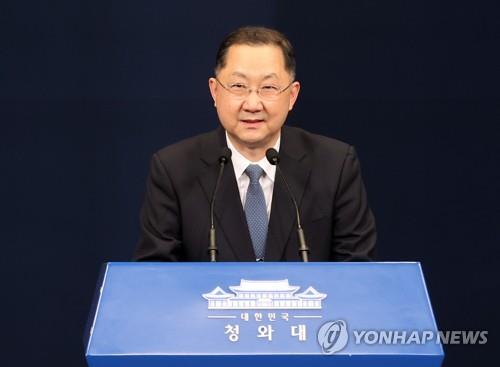 On one application, which was for a financial sales position, the son reportedly mentioned his father or gave an unrelated response in the answers to all five questions on the form.

Asked about his strengths and weaknesses, the son promised to "speak to my father and realize this company's dreams." Under "work experience," he asked the company to trust him because "I do not lie," and under "reasons for applying and ambitions," he asked that the company help him "spread my wings here."

The son was also found to have lied on his resume that he graduated from Yong In University in March 2018, when in fact he transferred to another university before graduating and later dropped out.

Kim apologized in an interview with MBC, saying what happened was unacceptable and left no room for excuses. He also said his son has been receiving treatment for anxiety and compulsive behavior.

The son also admitted he was wrong to write such applications and that he "must have been crazy" but that he "really wanted to get a job."

Shortly after Kim's resignation, Rep. Jun Jae-soo of the ruling Democratic Party (DP) shared on Facebook what he said was written by Kim's elder brother.

The brother wrote that his nephew has been suffering from schizophrenia since high school and unable to have a normal social life because of his frequent hospitalizations over 15 years.

He also said he is "heartbroken" that his younger brother accepted the blame and apologized even though he assisted the president without "ever creating any trouble," and suggested MBC went too far in reporting a personal tragedy.

Kim later spoke in front of reporters at Cheong Wa Dae, saying his son's "inappropriate behavior was entirely my responsibility."

"More than anything, I apologize deeply for causing concern to the people," he said. "Even though I am leaving, I hope the Moon Jae-in administration's commitment and efforts for justice and fairness will be assessed in full by the people."

Kim's resignation comes about nine months after his appointment. Moon has appointed five senior secretaries for civil affairs during his term and four of them have stepped down amid controversy. The first one, Cho Kuk, did not quit while in office but shortly after taking office as justice minister because of allegations of academic fraud involving his daughter.

The senior Cheong Wa Dae official said he was "certain" Kim was not involved in writing his son's applications.

Moon's quick acceptance of the resignation offer is seen as an attempt to remove potential obstacles in the few months remaining until the March 9 presidential election, especially with the DP's presidential nominee Lee Jae-myung facing allegations that his son engaged in illegal gambling and prostitution.