SEOUL, Dec. 21 (Yonhap) -- Samsung Electronics Co. took over the top spot in the global semiconductor market by revenue in the third quarter, a report showed Tuesday, on the back of strong memory chip sales.

Industry tracker Omdia said Intel, which had been the top chipmaker for 11 straight quarters, slipped to number two behind Samsung "as the memory segment, where Samsung is the number one DRAM and NAND supplier, was the largest growth area for semiconductor" in the three months ending in September.

DRAM, or dynamic random-access memory, is a type of volatile semiconductor memory that retains data as long as power is supplied. It is commonly used in personal computers, workstations and servers. NAND flash is a type of non-volatile storage that does not require power to store data.

According to Omdia, memory chip revenue rose 12 percent from the previous quarter, as demand for the chips used in applications and infrastructure for remote working and virtual learning has contributed to the growth. And the segment made up 29 percent of all semiconductor revenue.

As a result, three of the global top four chipmakers were memory-focused semiconductor companies -- Samsung, SK hynix and Micron Technology -- in the same period. 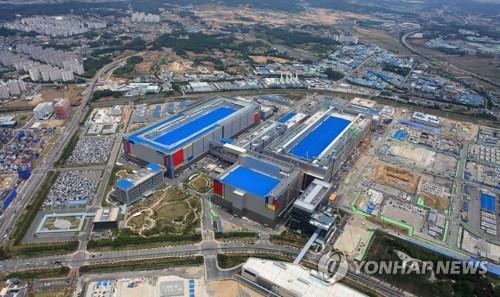 The semiconductor market reached US$153.2 billion in revenue in the July-September period, up 7.6 percent from the second quarter, continuing to set records for four consecutive quarters.

Omdia contributed a pandemic-induced shift towards a more technology-focused global economy to the market's solid growth.

"Increased demand for electronics and the resulting shortages for some semiconductor parts raised average selling prices and revenue for companies throughout the semiconductor industry," it said, adding that seasonal demand ahead of the holiday shopping season also boosted the revenue.

In the DRAM sector, Samsung's market share rose to 43.9 percent from 43.2 percent in the second quarter, while SK hynix took up 27.6 percent, down 0.6 percentage point, and Micron stayed put at 22.7 percent.

The NAND market logged a record-high quarterly revenue of $18.7 billion, up 13.8 percent from $16.4 billion in the second quarter.

"The NAND market was fueled by strong shipment growth to meet demand coming out of the enterprise and data center markets, as well as stable demand out of the smartphone market," Craig Stice, Omdia chief analyst for semiconductor research, said.

"Additionally, average selling prices in third quarter saw a near 5% quarter-on-quarter increase as supply and demand remained slightly out of balance," he said.

Samsung takes over Intel as top chipmaker by revenue: report

Samsung takes over Intel as top chipmaker by revenue: report