SEOUL, Dec. 22 (Yonhap) -- Hundreds of restaurant and other small business owners demonstrated in Seoul on Wednesday, demanding the government scrap the toughened virus rules and operating hour curfews that they say would crush their businesses already struggling amid the prolonged pandemic.

Some 300 members of the so-called national emergency association of small business against COVID-19 gathered near Gwanghwamun Square in central Seoul to protest the reintroduction of strict distancing and business rules since Saturday.

The participants were screened for vaccination status by on-site police. Police were seen trying to prevent the crowd from becoming larger than the allowed ceiling of 299 participants.

South Korea reimposed a set of revised virus restrictions across the country Saturday, which will remain in effect until Jan. 2, as infections surged out of control in the wake of the "living with COVID-19" scheme that began last month with an aim to regain pre-pandemic social normalcy.

Under the updated measures, the maximum size of private gatherings is limited to four people nationwide and a 9 p.m. or 10 p.m. curfew is applied to businesses, depending on the type of service. 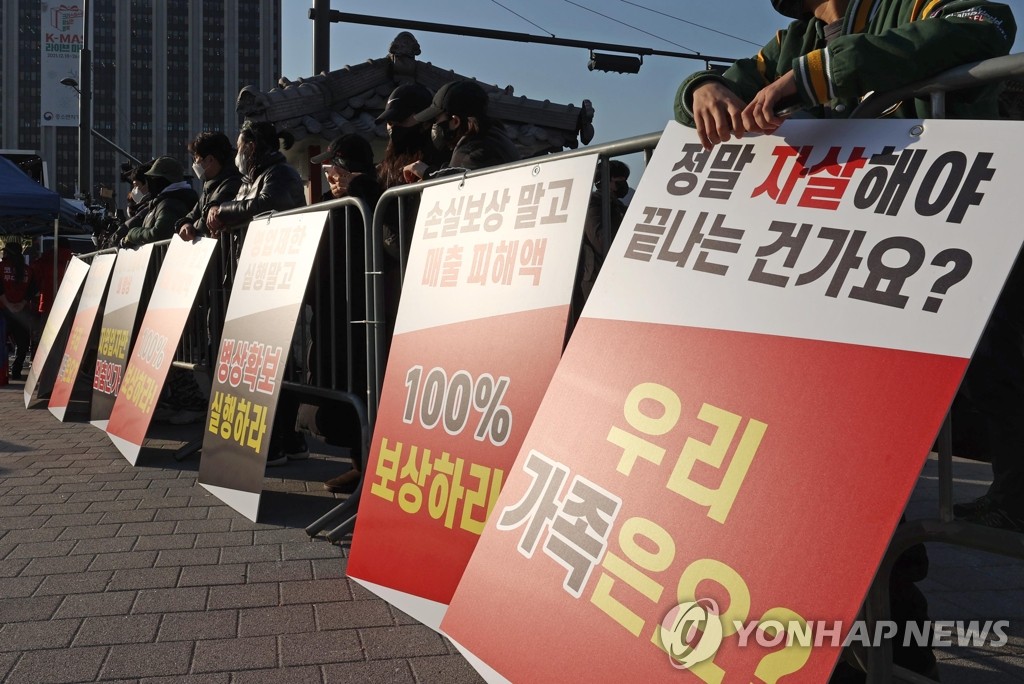 It also adopted a vaccine pass system that allows entries of only fully-vaccinated individuals aged over 18 and those with negative virus test results at restaurants, cafes, with company.

The government has announced it will pay 1 million won (US$839) each to small businesses affected by the strengthened rule, but it apparently is nowhere near the amount of help and attention small merchants are requesting.

"Fines and business closure orders are becoming overburdensome. The government should answer how vaccine pass violation fines are being imposed when we are barely managing to keep our businesses alive," Oh Se-hee, head of the Korean Federation of Micro Enterprise, said.

A 44-year-old internet cafe owner, surnamed Hwang, based in southwestern Seoul vented outrage against what he described as inconsistent government policy. Hwang said his business sustained 50 million won worth of damage in a single month after internet cafes were designated as "high-risk" facilities last year.

As the pandemic has dragged on, the economic toll is becoming simply unbearable, especially for most small retail businesses across all sectors. Some shop owners have even announced plans to defy the state-mandated business curfews in order to keep their business up and running.

"I want to properly run my business as well, but for small business owners like me, it is almost impossible to defy the government regulations," Kang Byung-joon, a 30-year-old bar owner from Incheon, west of Seoul, said.

"I lost about 80-90 percent of my customers after COVID-19 broke out and had to repeatedly lay off my employees and rehire other people due to changing business restrictions," he complained.

In December, the monthly business survey index of the Small Enterprise and Market Service dropped to 85.4, down 2.2 points from November, as the nation is currently battling with the worst coronavirus crisis since the beginning of the pandemic in January of 2020.

According to data from the micro enterprise federation, the amount of bank loans taken by small merchants had risen by over 150 trillion won in the past year to 900 trillion won as of September, from 748 trillion won last year. 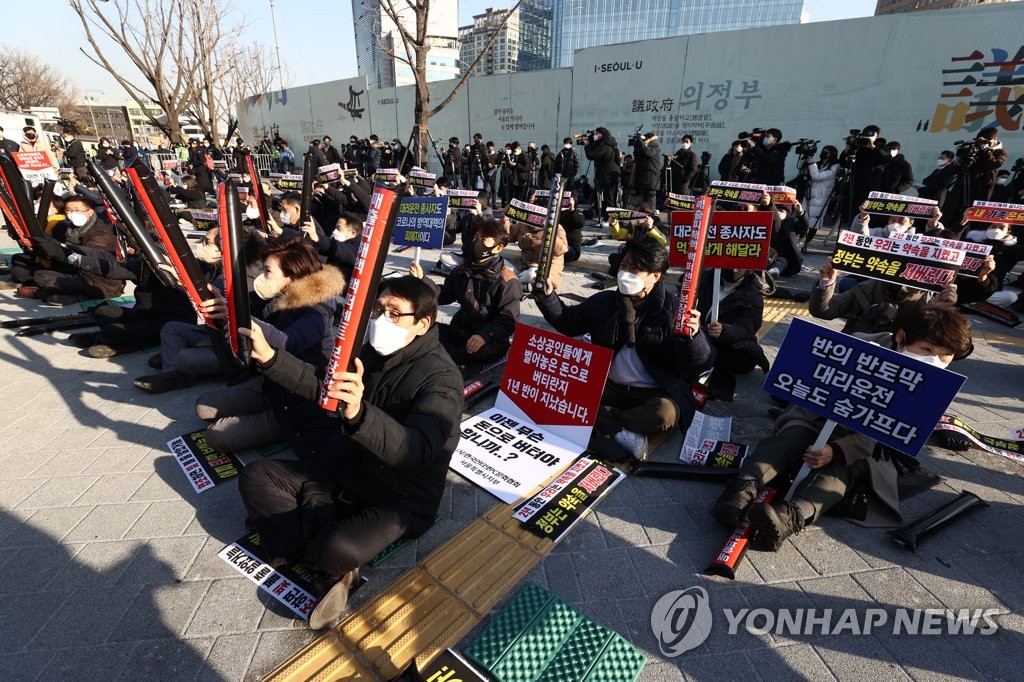