The ministry delineated the plans in a written policy report for 2022 to President Moon Jae-in as Seoul seeks to craft an optimal diplomatic strategy amid a hardening Sino-U.S. rivalry on technological primacy, security, trade and other fronts.

Delivered jointly with the unification and defense ministries, the report was the last annual government briefing on diplomatic, security and North Korea policies to Moon before his single, five-year term ends in May. 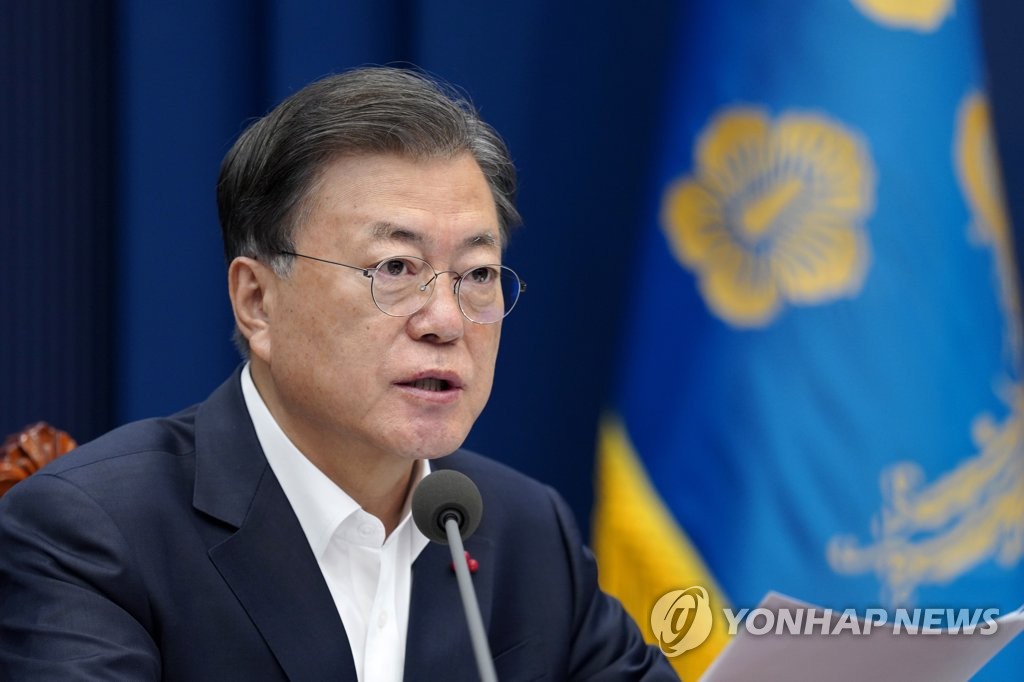 "We will further expand the horizons of cooperation between South Korea and the U.S. by continuing to push for future-oriented cooperation projects in areas, including public health, climate change, supply chains and cutting-edge technologies," the ministry said.

As part of its "science and technology diplomacy," the South will strengthen strategic cooperation with the U.S. on artificial intelligence, information and communications, quantum technology and space development, the ministry said.

Since the White House summit between Presidents Moon and Joe Biden in May, the allies have moved to broaden their partnership beyond its security focus to cover an array of global issues, such as supply chain resiliency, climate change and infectious diseases.

On China, the ministry said Seoul will seize on the 30th anniversary of the establishment of bilateral ties next year to strengthen high-level exchanges and ramp up efforts to prevent any future conflict with Beijing.

Concerns have persisted that the U.S. efforts to rally its democratic allies against China's growing assertiveness could potentially take a toll on relations between Seoul and Beijing.

On the issue of whether to send a Seoul government delegation to the upcoming Beijing Olympics, a senior official stressed the need for South Korea to play a role as the host of the previous Winter Games in PyeongChang in 2018.

"At the PyeongChang Games, we experienced world peace having been promoted through the Olympics in a virtuous circle," the official told reporters on the condition of anonymity.

"While keeping an eye on the consultations among the International Olympic Committee, the North and China, we are trying to see if there is anything that we can additionally contribute to," he added.

Capitalizing on the "Year of Korea-China Cultural Exchanges" from 2021-2022, Seoul hopes to achieve the "full restoration" of the two countries' cultural and people-to-people exchanges, the ministry said.

Bilateral cultural exchanges have been impeded by China's perceived restrictions on Korean entertainment and other industries that came in the wake of Seoul's 2016 decision to host a U.S. anti-missile system.

On diplomacy with Japan, the ministry said Seoul will maintain its "two-track" approach of separating tricky historical issues from its efforts to pursue "practical" cooperation with Tokyo.

The unification ministry, meanwhile, voiced concerns that security uncertainties could deepen if the current impasse on the North stretches into the early part of next year. It vowed to focus on resuming its stalled initiative for lasting peace on the Korean Peninsula.

"We will strive to create an unwavering driving force for peace on the peninsula through comprehensive progress in our efforts for cross-border relations, denuclearization and a peace regime," the ministry said.

The ministry reaffirmed its resolve to push for the proposed declaration of a formal end to the 1950-53 Korean War to help bring Pyongyang back to dialogue.

"Our government is pushing for the declaration as an entry point for peace on the peninsula and a catalyst for denuclearization negotiations," Vice Unification Minister Choi Young-joon told a press briefing.

"The declaration is an approach for the two Koreas and the U.S. to put down antagonism and confrontation and build trust without a dramatic shift in the status quo," he added.

To ensure "safe" inter-Korean dialogue in the COVID-19 era, the ministry plans to build a videoconference system for future cross-border talks.

The ministry also reiterated that it would pursue humanitarian cooperation with the North "regardless of political and military situations." To that end, it plans to prioritize pushing for face-to-face or video-linked reunions of the families separated by the Korean War.

In its policy report, the defense ministry stressed a plan to substantially bolster space security capabilities by increasing personnel with expertise, securing a military satellite and expanding related international cooperation.

It also plans to accelerate the process for the envisioned transfer of wartime operational control (OPCON) from Washington to Seoul through the full operational capability (FOC) assessment slated for next year. The FOC assessment is the second part of the three-stage program designed to assess Seoul's capabilities to lead the allies' combined forces.

The allies are still discussing whether to conduct the FOC assessment in spring or fall next year, a Seoul official said on condition of anonymity.

At the two countries' annual defense ministerial talks expected to take place in October, Seoul hopes to carry out the verification of the FOC assessment results to move the transfer process forward, according to the ministry.

Next year, the government also plans to push for the Navy's long-cherished project to acquire a light aircraft carrier by 2033. For the project, it seeks to enhance public understanding through open discussions in the first half and begin a process for the vessel's basic design in the latter half, according to a defense official.

In addition, the government seeks to increase the proportion of female troops to 9.2 percent of the total 555,000 active-duty service members next year, up from the earlier target of 8.8 percent. Currently, their proportion stands at around 8 percent.