Of 20,000 delivery workers at the logistics arm of the country's conglomerate CJ Group, some 1,700 couriers who have the right to strike are expected to launch an indefinite walkout Tuesday.

The walkout plan was approved by 93.6 percent of the vote by 2,290 unionized members earlier in the day.

The union claims the company pocketed most of the profits from hikes in delivery charges even as that money should have been spent to prevent couriers' overwork under a January deal between the government and logistics firms.

The deal called for logistics firms to hire extra workers to sort parcels and take other steps to prevent overwork.

The agreement came after 16 delivery workers died last year apparently due to overwork. 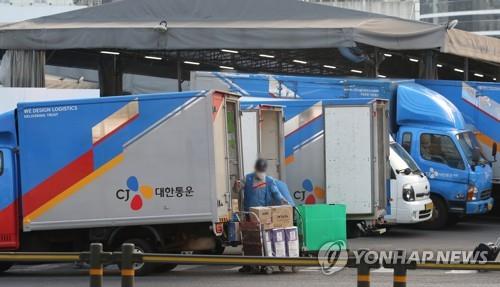 The union claims CJ Logistics raised the shipping charge by 170 won (US$0.14) in April, but only 51.6 won of the hike was used to improve working conditions for delivery workers.

CJ Logistics, meanwhile, expressed regret over the strike plan. The company said some 50 percent of the hiked charges have been allocated for delivery workers' commission fee. It claimed the shipping charge rose by a smaller margin of 140 won.