SEOUL, Dec. 24 (Yonhap) -- This week's senior-level diplomatic talks between South Korea and China touched on a set of geopolitical issues related to Sino-U.S. relations and the Taiwan Strait, a Seoul official said Friday.

On Thursday, Seoul's Vice Foreign Minister Choi Jong-kun and his Chinese counterpart, Le Yucheng, held the first "Strategic Dialogue" in more than four years, as South Korea has faced an increasingly tricky balancing act in the midst of a hardening Sino-U.S. rivalry.

"There were related mentions in the process of the Chinese side explaining its perspectives and position regarding the relations between the United States and China," the official at the foreign ministry told reporters on condition of anonymity.

The official was responding to a question of whether the sensitive diplomatic issues of Washington's policy on Beijing, as well as the Biden administration's Indo-Pacific strategy, were discussed at the virtual session.

South Korea has been grappling with a set of tricky policy considerations, including whether or not to send a government delegation to the upcoming Beijing Olympics following the U.S.' decision to diplomatically boycott the games.

The Chinese side was also said to have mentioned the security pact that the U.S., Australia and Britain clinched earlier this year to equip Australia with a conventionally armed, nuclear-powered submarine. The deal is seen as part of an effort to counter China's maritime assertiveness.

"China provided explanations on that matter in broad terms rather than specifically when talking about how it looks at the current global situations," the official said.

Beijing has lambasted the trilateral pact, also known as AUKUS, as a formation of a maritime "clique" and warned that it would only exacerbate an arms race in Northeast Asia and undermine global efforts against nuclear proliferation.

The South Korean side said it hopes to play a role on its own to help promote cooperation between the two major powers, according to the official.

Regarding North Korea, the official said that Seoul expects Beijing to play a "constructive role" to help bring Pyongyang back to dialogue. 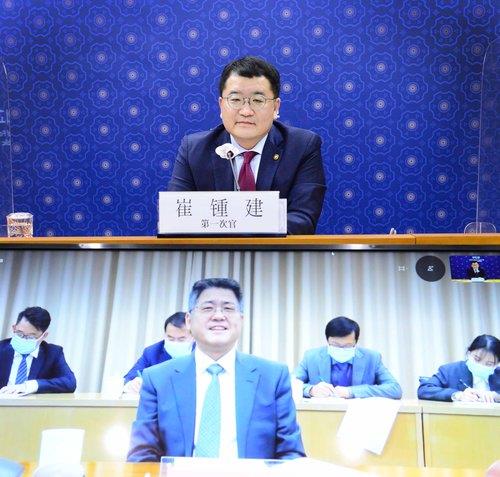