Boo Seung-chan, the ministry's spokesperson, made the remarks following a report by the Japanese broadcaster NHK that the countries are coordinating over the idea of holding the talks among Seoul's Defense Minister Suh Wook and his U.S. and Japanese counterparts, Lloyd Austin and Nobuo Kishi, respectively, in Hawaii in mid-January.

"Regarding the issue of holding the trilateral defense ministers' meeting, we are currently in consultations with the related countries," Boo told a regular press briefing. 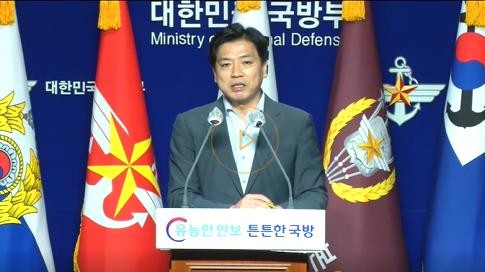 Boo pointed out that through their annual Security Consultative Meeting in Seoul earlier this month and other high-level talks, Seoul and Washington shared the understanding that the allies will seek to hold the three-way defense ministerial talks with Japan at an early date.

The three countries last held a trilateral defense ministerial meeting on the margins of security talks involving the Association of Southeast Asian Nations (ASEAN) in Bangkok in November 2019.

The envisioned trilateral session, if held, would come at a time when Washington is striving to rally its allies and partner countries to counter China's assertiveness amid an intensifying great-power rivalry on multiple fronts, including technology, security and trade.