SEOUL, Dec. 29 (Yonhap) -- South Korea's new coronavirus cases bounced back to above 5,000 for the first time in three days Wednesday and the number of critically ill patients surged to a record high.

The country added 5,409 new COVID-19 infections, including 5,283 local infections, raising the total caseload to 620,938, according to the Korea Disease Control and Prevention Agency (KDCA).

Wednesday's figure marked a rise from 3,865 on Tuesday and 4,206 on Monday, but it represented a sharp decline from a daily record high of 7,849 on Dec. 15. The number of new daily cases usually shrinks at the beginning of the week due to less testing over the weekend.

Health authorities and local governments, meanwhile, had reported 4,533 new cases as of 9 p.m., down 178 from the same time the previous day.

The greater Seoul area accounted for 71.6 percent of new cases. Considering daily cases are counted until midnight, the tally to be announced the following morning is expected to be in the 5,000s. 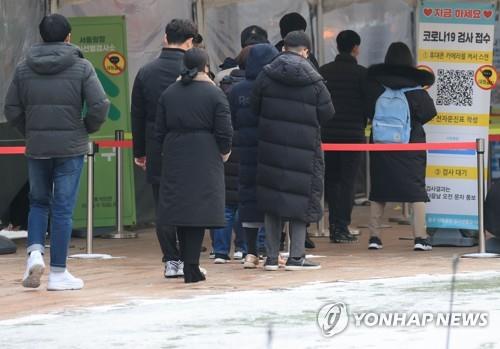 The number of critically ill COVID-19 patients rose to another record high of 1,151, the KDCA said. Previous record high was 1,105 reported on Saturday. Critical cases have stayed above 1,000 for nine consecutive days.

The bed occupancy rate in intensive care units for COVID-19 patients in the greater Seoul area stood at 78.7 percent as of 5 p.m. on Tuesday, slightly down from 81.1 percent at the same time a day earlier.

A figure higher than 75 percent is considered to have surpassed the saturation point.

Also, the country had no single COVID-19 patient waiting to be admitted to hospitals for treatment as of midnight Wednesday. It marks the first time since early November that the figure dropped to zero.

The country added 36 more deaths from the pandemic, bringing the death toll to 5,382. The fatality rate stood at 0.87 percent, unchanged from a day earlier

It marks the first time in 26 days that the daily new deaths dropped below 40.

Health authorities said they will extend the special quarantine procedures against the omicron variant for four more weeks until Feb. 3.

They also said they will maintain the mandatory 10-day quarantine for all international arrivals and the entry bans for short-term travelers from 11 countries, including South Africa and Ethiopia.

Also, the government will halt sales of new flight tickets to Singapore until Jan. 20.

Currently, those arriving from countries that have signed a "travel bubble" agreement with South Korea, including Singapore and Saipan, are exempt from the quarantine.

Earlier in the day, Jeong Eun-kyeong, head of the KDCA, said several indicators have shown that the pandemic has started to show improvement.

However, she said risk factors persist over a rising number of critically ill patients, deaths, as well as a low reservation rate for booster shots and a possible community infection of omicron variant.

On Dec. 18, the government reimposed a set of revised virus restrictions across the country, which will remain in effect until Jan. 2 to stem the spread of the virus.

It marks a reversal of the government's "living with COVID-19" scheme that began early last month with an aim to return to normalcy by relaxing virus restrictions in phased steps.

Authorities earlier said they will announce on Friday whether to extend the measures.

Of the locally transmitted cases, Seoul reported 1,869, while 1,608 came from the surrounding Gyeonggi Province and 309 from Incheon, 40 kilometers west of Seoul.

The KDCA said 126 cases came from overseas, up from 88 reported a day earlier. It marks the second time this year that the daily new cases reached triple digits.

As of Wednesday, 85.9 percent of the country's 52 million people had received their first shots of COVID-19 vaccines, and 82.6 percent had been fully vaccinated, while 32.3 percent had gotten booster shots, the public health agency said.

The KDCA said South Korea is set to receive an additional 1.49 million doses of the Moderna vaccine on Thursday from Samsung Biologics' plant.