SEOUL, Dec. 29 (Yonhap) -- The loosening of a device to anchor a helium tank of the Nuri space rocket was found to have caused the early shutdown of the rocket's third-stage engine, leading to a mission failure, the science ministry said Wednesday.

It flew to a target altitude of 700 kilometers, but failed to put the dummy satellite into orbit as its third-stage engine burned out 46 seconds earlier than expected.

The government set up a committee, involving researchers of the Korea Aerospace Research Institute (KARI) and other aerospace experts, to learn what went wrong.

After weeks of investigation, the committee concluded that the helium tank fell off of its anchoring device inside the oxidizer tank of the rocket due to increased buoyancy during the flight.

The detached tank then caused cracks in the oxidizer tank and damage to the tank pipes as it flew around unfastened, causing leakage of helium and oxidizer.

The lack of oxidizer flowing into the third-stage engine eventually caused the engine to shut off prematurely, officials at the Ministry of Science and ICT said during a press briefing.

South Korea had originally planned to launch the Nuri rocket in May next year as part of its four other scheduled launches until 2027.

Officials at the science ministry said the second launch of the Nuri could be delayed.

South Korea has invested nearly 2 trillion won (US$1.8 billion) in building the three-stage Nuri since 2010. The whole process of the launch of Nuri was carried out with domestically made technology on its own soil, including design, production, testing and launch operation. 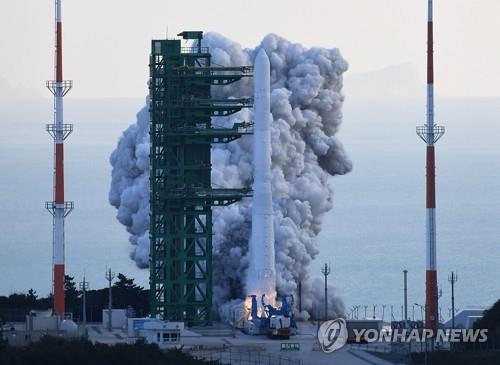