SEOUL, Dec. 29 (Yonhap) -- The family of a South Korean fisheries official killed by North Korea's military near the western sea border last year applied for an injunction Wednesday to stop the presidential office's information on the official's death from being designated as access-restricted presidential records.

In September last year, North Korea fatally shot the 47-year-old fisheries official, who was adrift on its side of the Yellow Sea, and burned his body, according to the South Korean military. The Coast Guard announced the official appeared to be trying to defect to the North, though the announcement was flatly denied by his bereaved family. 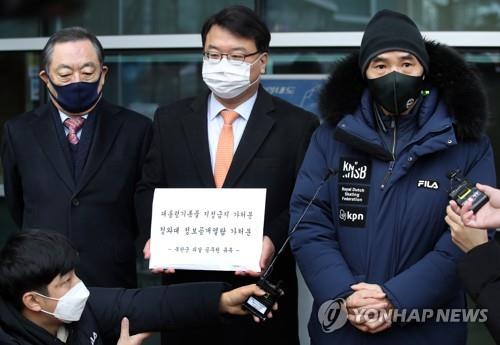 The family has since demanded the truth behind the official's death and launched a litigation for the disclosure of all relevant government information. The Seoul Administrative Court last month ordered Cheong Wa Dae's National Security Office (NSO) and the Coast Guard to provide undisclosed information on the official's death to his family, but the two organs appealed the ruling.

The family filed the injunction with the same administrative court against President Moon Jae-in and the NSO, saying their rights cannot be protected regardless of any appellate ruling, if the information is designated as classified presidential records after Moon leaves office next year.

The family also applied for an injunction to read the undisclosed information in accordance with last month's ruling.

"Even though a (South Korean) national was unfairly killed, the state is only defending itself for its own sake," said Lee Rae-jin, the elder brother of the deceased official.

"It is outrageous to see (the government) act like this despite the court's order for information disclosure. The president should apologize and respond to the public now," he said.

Lee said he plans to visit Cheong Wa Dae next week to return Moon's letter sent in October to a teenage son of the late fisheries official.

A lawyer for the family also criticized Cheong Wa Dae's decision to appeal to a higher court as showing its intention to designate the information as presidential records at the end of Moon's five-year term in May next year.