Lee of the liberal Democratic Party garnered 39 percent support against Yoon of the conservative People Power Party's 28 percent, according to the survey of 1,000 adults conducted Monday through Wednesday by Embrain Public, Kstat Research, Korea Research and Hankook Research. 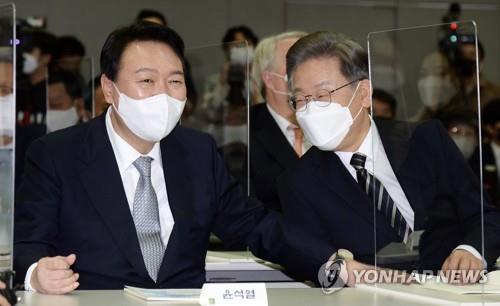 Ahn Cheol-soo, the presidential candidate of the minor opposition People's Party, came in third with 6 percent, followed by Sim Sang-jeung of the progressive Justice Party with 5 percent.

The survey showed 45 percent of the respondents want the ruling party candidate to win the March 9 presidential election in order to ensure the stable running of state affairs.

In comparison, 40 percent of the respondents said they want the opposition candidate to win as a rebuke of the current administration.