In a survey of 1,005 voters conducted by Hankook Research on Wednesday and Thursday, Lee garnered 34.3 percent, compared with Yoon's 28.7 percent.

The 5.6 percentage-point gap is within the margin of error of plus or minus 3.1 percentage points of the poll, commissioned by the Hankook Ilbo daily. It has a confidence level of 95 percent.

Ahn Cheol-soo of the minor opposition People's Party came in third with 9 percent support, followed by Sim Sang-jeung of the progressive Justice Party at 4.5 percent.

The poll result is another indication of Ahn's recent rise in opinion surveys. Ahn received 10.3 percent support in a separate poll released a day earlier, the first time he has attained double-digit support in the ongoing presidential race. 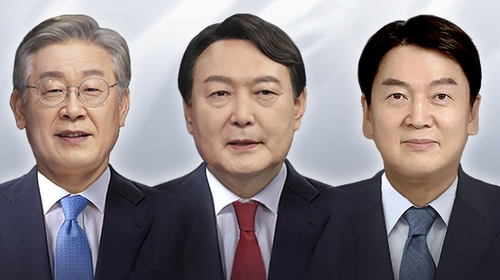 A separate survey by Southern Post, released later in the day, put the margin of Lee's lead over Yoon at 10.5 percent.

In the poll commissioned by broadcasting firm CBS, Lee had 35.7 percent support against Yoon's 25.2 percent. Ahn had 6 percent.

The survey, conducted on 1,027 voters on Wednesday and Thursday, also had a margin of error of plus or minus 3.1 percentage points, with a confidence level of 95 percent.

In the Hankook Research, 47.8 percent of the respondents said an opposition presidential candidate should be supported to deliver a punishment to the current administration, while 37.5 percent threw their support behind the DP remaining in power.

Of those who opted for an opposition candidate, 64.8 percent agreed on an option of merging the candidacies of Yoon and Ahn.

Meanwhile, 63.5 percent of the poll respondents were in favor of the recent pardon for former President Park Geun-hye, with 32.4 percent saying it was the wrong decision.