SEOUL, Jan. 3 (Yonhap) -- President Moon Jae-in said Monday he will pursue an "irreversible path to peace" on the Korean Peninsula until his term ends, calling for dialogue and cooperation with North Korea.

In his final New Year's speech as president, Moon admitted South Korea still has a long way to go to improve inter-Korean relations, despite many achievements during his five-year term.

"I will not stop efforts to institutionalize sustainable peace," Moon said in the nationally televised address, adding South Korea will make final efforts for normalization of inter-Korean relations and a path toward irreversible peace.

By institutionalizing peace, Moon appeared to be referring to his initiative to adopt a declaration with North Korea and other countries of a formal end to the 1950-53 Korean War as part of efforts to kickstart long-stalled talks with Pyongyang.

"If we resume dialogue and cooperation, the international community will respond," Moon said. "The government will pursue normalization of inter-Korean relations and an irreversible path to peace until the end. I hope efforts for dialogue will continue in the next administration too."

Moon's speech came after North Korea wrapped up a key party meeting but stopped short of providing the outside world with fresh clues to its key policies related to inter-Korean ties and denuclearization talks with the United States. 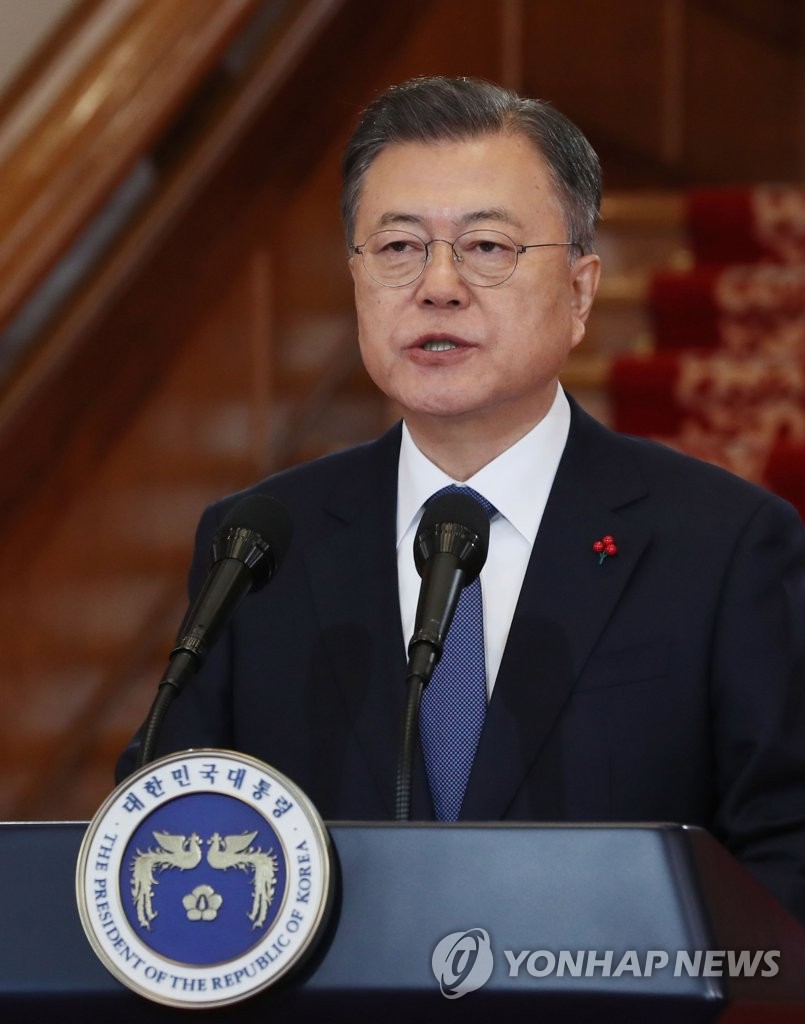 South Korean officials said that Seoul and Washington have made considerable progress over the declaration ending the 1950-53 Korean War, but North Korea has been unresponsive to their overtures for dialogue.

Denuclearization negotiations between the U.S. and the North have remained stalled since the two countries' no-deal Hanoi summit in 2019.

"Peace is an essential prerequisite for prosperity. But, peace tends to be shaken if it is not institutionalized," Moon said.

With the COVID-19 pandemic entering its third year, Moon expressed his gratitude toward public health workers for their hard work during the pandemic, while offering condolences to those who died of the disease.

Last November, South Korea eased long-enforced restrictions on private gatherings and business operations as part of efforts to return to normalcy in phases under the "living with COVID-19" scheme.

Since then, daily virus cases had surged to almost 8,000 in mid-December, prompting the government to reimpose tighter virus curbs. Recently, daily cases showed signs of slowing down.

Moon said he "will make the year 2022 the first year of normalization by fully recovering from the crisis."

The number of serious or critical cases is expected to soon decline as the pace of vaccination of third shots picks up and more hospital beds are secured, Moon said.

However, Moon warned against complacency due to concerns about the highly-transmissible omicron variant.

Moon said the government will spare no efforts to fight against the omicron variant, adding that "it is a matter of time" for the omicron to become a dominant strain in South Korea.

Moon's single, five-year term ends in May and the presidential election will be held on March 9.

Moon said he hopes the upcoming presidential election to become "an election for unity that includes people's hope, not confrontation, hatred and division."

(LEAD) Moon pledges to pursue 'irreversible path to peace' with N. Korea until his term ends

(LEAD) Moon pledges to pursue 'irreversible path to peace' with N. Korea until his term ends