Chung Young-soo, who was working at University of Wisconsin-River Falls, claimed in recent telephone interviews with Yonhap News Agency that the incident took place when he was staying at her residence with other invitees for a cultural event held at her university in October 2017.

She said the novelist came to her room in his underwear without knocking in the early hours of a day during the period and left when she screamed upon sensing the presence of a person.

To back up her claims, she recently published a set of books that contain some 300 emails that she and the novelist had exchanged for about a year around 2017.

The emails were mostly about work at first but later began to include Ahn's confession of his feelings toward her, with some containing explicit sexual descriptions, she claimed. 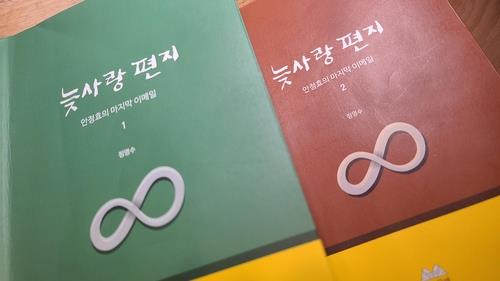 However, Ahn strongly denied the allegations, claiming that she is making one-sided arguments.

"I was looking for a lamp and asked her about it, but she just screamed," he said. "The door was open, and I didn't enter the room."

The 80-year-old novelist has worked as a reporter, columnist, and editor at English-language newspapers, including Korea Times, and has written several books, including "White Badge," which was published in the United States in 1989 and adapted into a film in Korea in 1992.

He has also translated nearly a hundred books into his native language, including "One Hundred Years of Solitude" by Gabriel Garcia Marquez.