SEOUL, Jan. 3 (Yonhap) -- Ahn Cheol-soo of the minor People's Party is regarded as the better fit as the unified opposition presidential candidate than Yoon Seok-yeol of the main opposition People Power Party (PPP) should the two merge their campaigns for the upcoming election, a survey showed on Monday.

Commissioned by JTBC, Global Research polled 1,012 adults over the weekend on whom they would support in a hypothetical unification of the two opposition nominees.

Of the respondents, 41.1 percent said they backed Ahn, while 30.6 percent said Yoon was the better candidate to run for the opposition side.

But among those who approved of the unification, 55.9 percent said they supported Yoon, compared with 35.9 percent who favored Ahn. 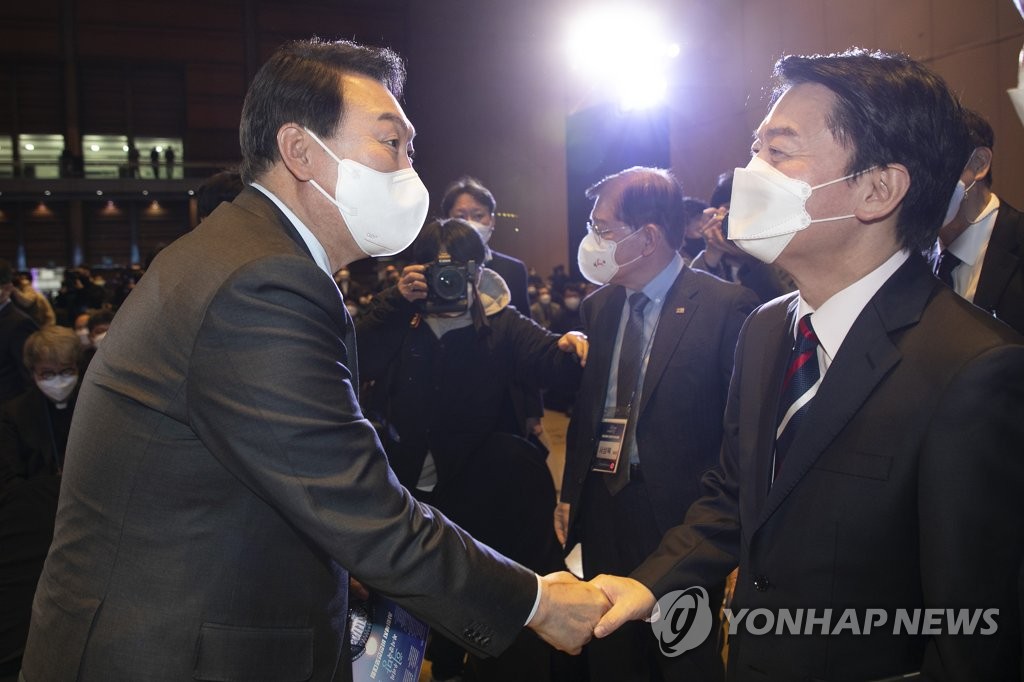 Yoon has seen his support drop in recent days, with the ruling Democratic Party candidate Lee Jae-myung moving out in front in multiple polls.

Leaders of the PPP's campaign committee offered to resign en masse Monday, sensing the need to overhaul the ex-prosecution chief's presidential bid marred by internal feuds and controversy over his wife's alleged lying on resumes.

Ahn, for his part, has frequently rejected the possibility of forming an alliance with either Yoon or Lee, saying he is in the race to win for himself and to make South Korea a better country with his own power.

In the same Global Research survey, 56.7 percent said Yoon was responsible for the messy situation at the PPP, while 31.3 percent pointed fingers at the party's chairman, Lee Jun-seok.

However, among PPP supporters, 57.4 percent held Lee accountable, compared to 32.7 percent who did the same for Yoon.

On the question of who was most likely to win the presidential election, regardless of the party of their choice, 53.2 percent of the respondents picked Lee Jae-myung, whereas Yoon had 27.8 percent support.

In a hypothetical multicandidate race, Lee led the way at 37 percent, with Yoon trailing at 28.1 percent. Ahn was a distant third at 9.1 percent.