The number of homes changing hands nationwide stood at 67,159 in November, down 42.5 percent from a year earlier, according to the data from the Ministry of Land, Infrastructure and Transport.

Compared with the previous month, the November tally was down 10.8 percent.

The number of home transactions in the greater Seoul area, which includes the western port city of Incheon and the adjacent province of Gyeonggi, shrank 35.9 percent, with that in the rest of the country plunging 46.1 percent. 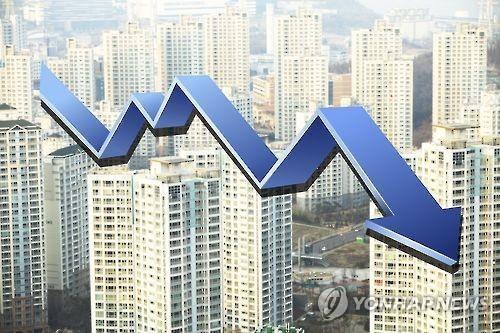 November's nosedive came amid tighter restrictions on mortgages and rising lending rates in the wake of the central bank's hike in the country's benchmark interest rate.

In a bid to curb rising home prices and household debt, the government has made it harder for homebuyers to take out mortgages. In November, the Bank of Korea raised its seven-day repo rate by 0.25 percentage point to 1 percent to help tame inflation and household debt

The ministry, meanwhile, said the country's new home permits climbed 24.2 percent on-year to 448,092 in the first 11 months of the year.

New construction permits in the capital area increased 18.7 percent, and those in the rest of the country surged 30.4 percent. Permits in Seoul soared 54.6 percent.

By type, construction permits for new apartments jumped 28.4 percent, and those for other types of housing, such as row and detached houses, went up 12.8 percent.

The number of groundbreakings for new homes swelled 19.5 percent on-year to 501,878 units in the January-November period, according to the ministry.
(END)