The country added 3,024 new COVID-19 infections, including 2,889 local infections, raising the total caseload to 645,226, according to the Korea Disease Control and Prevention Agency (KDCA).

The figure was down 105 from a day earlier and down 841 compared with the same day last week. This also marked the third straight day that the daily cases have fallen below 4,000, following 3,832 and 3,126 reported Sunday and Monday, respectively.

South Korea reported 51 more COVID-19 deaths, raising the death toll to 5,781, the KDCA said. The number was smaller than the previous day's 36 deaths. The fatality rate stood at 0.9 percent.

The number of critically ill COVID-19 patients came to 973, down 42 from a day earlier. Critical cases fell below 1,000 for the first time in 15 days.

Since daily cases are tallied through midnight, the figure announced the following morning is likely to be in the 4,000s. Of the new cases tallied at 9 p.m., 70 percent came from the capital area. 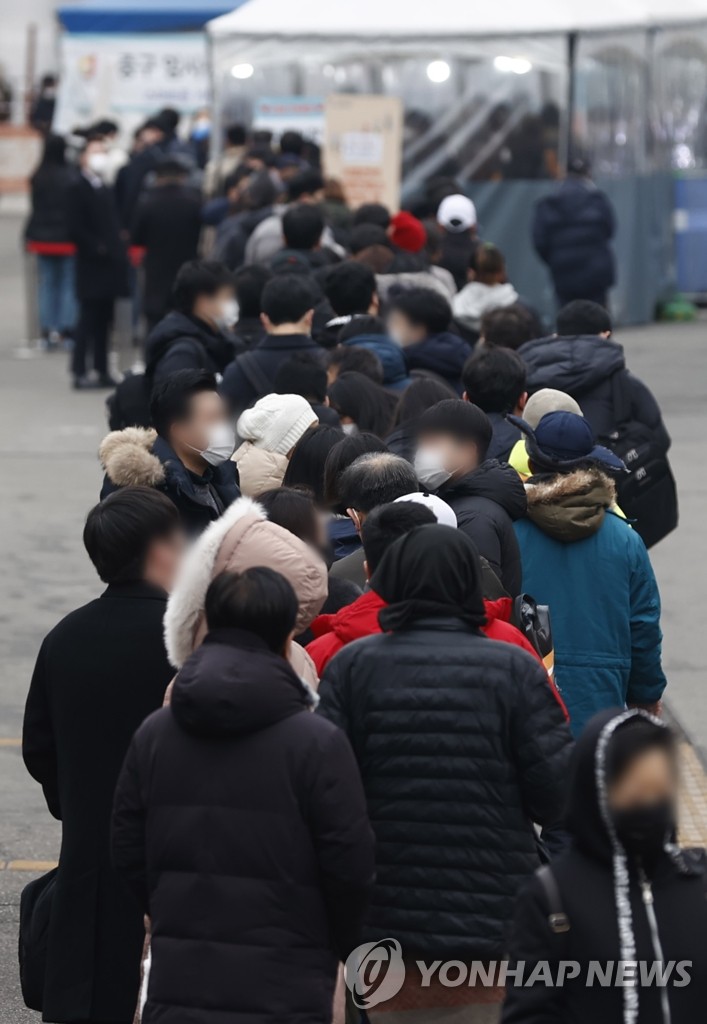 In early November, the government eased long-enforced pandemic-era restrictions as part of efforts to return to normalcy in phases under the "living with COVID-19" scheme.

The daily cases, however, soared to a record high of 7,848 on Dec. 15, prompting the government to reimpose antivirus regulations days later for two weeks, which were supposed to end Sunday.

The government extended the enforcement of those rules for an additional two weeks through Jan. 16, which include a four-person cap on private gatherings across the nation and a 9 p.m. business hour curfew on cafes and restaurants.

Health authorities are still on high alert, as the country reported its first omicron-linked death cases.

They were the first omicron-linked deaths in South Korea since the variant was first reported on Dec. 1 in the country.

Meanwhile, Seoul reported 903 out of the 2,993 locally transmitted COVID-19 cases, while 916 came from the surrounding Gyeonggi Province and 162 from Incheon, a port city west of Seoul.

A total of 42.6 million people, or 83.1 percent of the country's 52 million population, have been fully vaccinated, and about 19 million, or 37 percent, have received booster shots, the KDCA said.