SEOUL, Jan. 4 (Yonhap) -- President Moon Jae-in on Tuesday instructed his aides to make utmost efforts to contain the spread of the highly transmissible omicron variant, as health authorities warned that omicron is likely to soon replace the delta variant as the dominant strain in South Korea.

Moon also called for officials to spare no efforts to provide compensation to small merchants and self-employed people who were hit by the government's imposing of tighter virus curbs.

"The government should make utmost efforts for anti-epidemic measures and medical responses in the wake of the spread of the omicron variant, as well as compensation and support for small merchants," Moon told a Cabinet meeting.

Last November, South Korea eased long-enforced restrictions on private gatherings and business operations as part of efforts to return to normalcy in phases under the "living with COVID-19" scheme.

But daily virus cases had surged to almost 8,000 in mid-December, prompting the government to reimpose tighter virus curbs. Recently, daily cases have showed signs of slowing down. 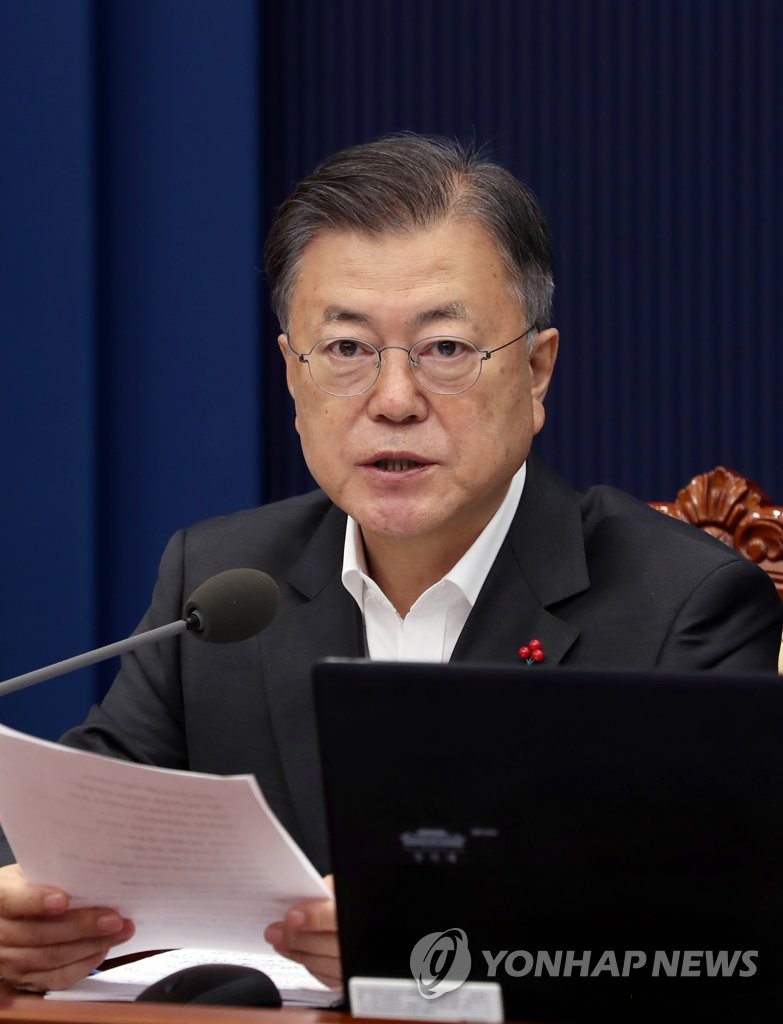 However, health authorities said omicron could become the dominant strain in South Korea as early as this month. As of Monday, South Korea had confirmed 111 more omicron infections, bringing the total to 1,318.

The toughened rules brought a setback to the government's "living with COVID-19" scheme that targets people's gradual return to normal life, and caused a strong backlash from small merchants and self-employed people.

To ease their suffering, the government has decided to provide COVID-19 damage compensation for the first quarter in advance. Some 550,000 self-employed people will receive 5 million won (US$4,200) each first, with the actual calculations of their financial damage and related compensation to be conducted later.

Moon said South Korea's exports are likely to surpass $700 billion this year, but challenges remain over global disruptions of the supply chain and gains in prices of raw materials.

Meanwhile, the Cabinet meeting endorsed a revised law on compensating the victims and bereaved families during the bloody crackdown of a civilian uprising, known as the Jeju April 3 Incident, on Jeju Island between 1948 and 1954.

On April 3, 1948, Jeju islanders began protesting against U.S. military-led rule following Korea's liberation from Japan's 1910-45 colonial rule. The then-government distorted the uprising as a communist riot and massacred an estimated up to 30,000 civilians, about 10 percent of the island's population at the time, in armed crackdowns over the subsequent years.

Moon told the meeting the revised law is the first legislative measure for civilian casualties before and after the 1950-53 Korean War, according to presidential spokesperson Park Kyung-mee.

The state compensation includes not only actual damage, such as medical expenses, but also lost profits and mental damage.