SEOUL, Jan. 5 (Yonhap) -- China looks forward to welcoming South Korea's official delegation to the upcoming Beijing Olympics and making it a grand event together, Beijing's top envoy here said, as keen attention is being paid to whether Seoul will send government delegates to its opening ceremony slated for early February.

Amb. Xing Haiming appreciated Seoul's consistent support for the global event as the host of the 2018 PyeongChang Winter Olympics and a sports powerhouse, despite diplomatic boycotts by the United States and some like-minded countries over China's controversial human rights record.

"China would welcome South Korea's delegation to the opening ceremony of the Winter Olympics to make it a grand Olympic event together," Xing said during an interview with Yonhap News Agency at his office in Seoul on Tuesday, a month ahead of the opening of the games. 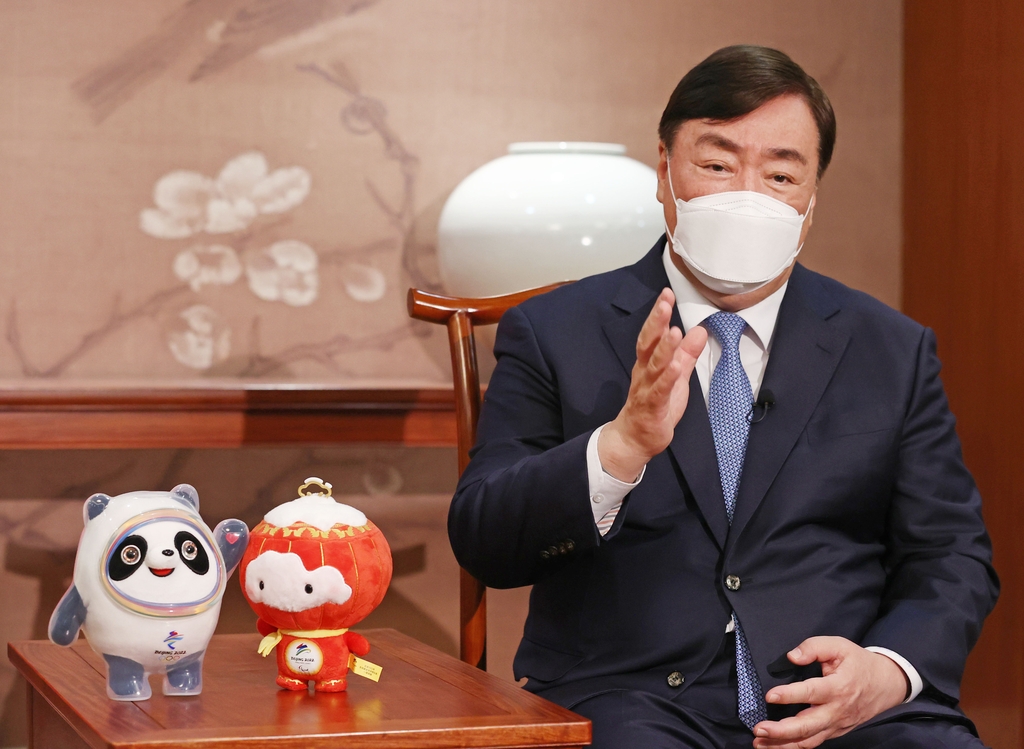 While South Korea has not yet announced whether to dispatch a delegation to the ceremony, the veteran diplomat noted "China will welcome whoever comes from the government." The matter of heads of state and other international dignitaries attending it is handled by their own national Olympic committees.

He reaffirmed Beijing's commitment to continuing efforts to help promote regional peace amid dimmed hopes of a breakthrough from the upcoming Olympics following Washington's decision to boycott it diplomatically.

"China will continue to play an active role in (helping) improve inter-Korean relations and promoting peace and stability on the Korean Peninsula," he said.

Xing said China will closely communicate with South Korea for "various types of exchanges" between their leaders under the coronavirus situation. He avoided going into details. Observers say President Moon Jae-in and his Chinese counterpart, Xi Jinping, may hold a virtual summit in the run-up to the Olympics.

Moon visited China in 2017 and 2019, but Xi's agreed-upon reciprocal trip has been postponed due to the pandemic.

The ambassador reiterated Beijing's support for Seoul's push for the declaration of a formal end to the 1950-53 Korean War. He called on relevant countries to begin talks on details.

"As an important nation for the Korean Peninsula and one of the signatories of the armistice agreement, China will play a critical role by participating in the whole process of shifting toward a peace regime," he said.

During the war, the U.S. fought alongside South Korea to fend off an invasion by North Korea, which was backed by China. The conflict ended in an armistice, not a peace treaty.

Seoul and Washington have made considerable progress over the draft of the declaration, but Pyongyang has been unresponsive to their overtures for dialogue. The Moon administration is running out of time, as his five-year term is slated to end in May.

Regarding the China-U.S. rivalry, Xing expressed hope Seoul will maintain close economic ties with Beijing and take a "right" position, especially over the sensitive issue of Taiwan, which it regards as part of its territory.

He emphasized the "One China" policy is a "prerequisite" for maintaining the bilateral diplomatic relations established 30 years ago and warned of a "stern response" to any attempts to interfere with its "internal matters."

"We hope the South Korean government won't forget its original intention of forging diplomatic relations (with China), and wish and believe it will hold a right position regarding the Taiwan issue," he said.

Beijing officials have expressed concerns after the Taiwan Strait was mentioned in joint statements following a South Korea-U.S. summit in May and the bilateral defense ministers' meeting last month amid escalating tension in the hotspot.

The envoy said Seoul and Beijing should continue to cooperate in advanced technology sectors, such as semiconductors, for mutual benefits, given their tightly interconnected industrial structure and supply chain.

"Together with South Korea, China wants to protect multilateralism and free trade, and pursue a win-win partnership," he added.