WASHINGTON, Jan. 4 (Yonhap) -- The United States must not give anything to North Korea, including an end of war declaration, before Pyongyang returns to the dialogue table, former U.S. ambassador to South Korea Harry Harris said Tuesday.

Harris noted prospects for the complete denuclearization of the Korean Peninsula are getting darker by the day, but insisted giving benefits in advance to the North would only lead to failure.

"I'll simply say that the quest for dialogue with the North must never be made at the expense of the ability to respond to threats from the North. Dialogue and military readiness must go hand in hand. Idealism must be rooted in realism," Harris said when asked how the U.S. should move ahead on North Korea in a webinar hosted by the Washington Times Foundation.

"I firmly agree that we must not relax sanctions or reduce joint military exercises just to get North Korea to come to the negotiating table. This is a tried and true road to failure," he added. 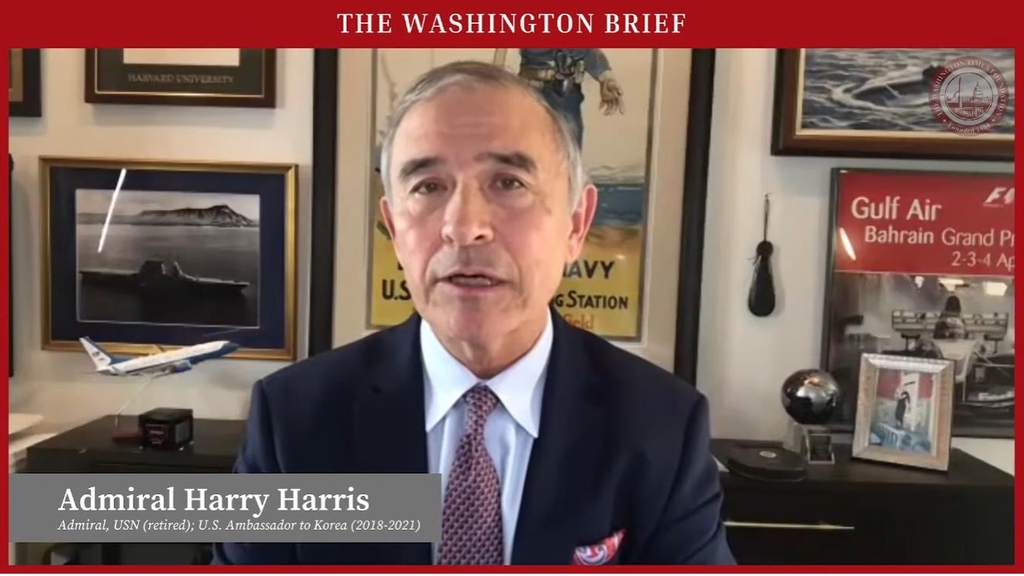 His remarks come amid stalled negotiations with North Korea, which has stayed away from denuclearization talks since 2019.

Pyongyang also remains unresponsive to numerous overtures from the Joe Biden administration, which took office in January 2021, citing what it claims to be U.S. hostility toward Pyongyang and arguing such hostility is shown in joint U.S.-South Korean military exercises.

Harris noted the outlook for resumed dialogue with North Korea was getting darker by the day.

"I do not believe that it is a rosy scenario. I think it's a dark scenario, getting darker every day," he said.

Still, he insisted the U.S. and South Korea must not reduce their joint military drills.

"We have done, I think, all that we could do with regard to encouraging North Korea to come back to the negotiating table, without any preconditions at all. And I think it's up to them," said Harris, a retired Navy admiral who also served as commander of U.S. Indo-Pacific Command.

As a way of restarting dialogue with North Korea, South Korea proposed declaring a formal end to the Korean War.

"I always thought we had an end to war declaration. It's called the armistice agreement and it served us well for decades."

U.S. must not reward N. Korea with end of war declaration before talks: Harry Harris

U.S. must not reward N. Korea with end of war declaration before talks: Harry Harris