SEOUL, Jan. 5 (Yonhap) -- A North Korean defector crossed the eastern inter-Korean border into the North over the weekend despite surveillance cameras having caught him as many as five times, South Korea's military said Wednesday in a sign of a major security failure.

The Joint Chiefs of Staff released the results of its dayslong on-site investigation into how the 30-something man, who defected to the South in November 2020, returned to the North largely undeterred Saturday night.

South Korea's military has come under public opprobrium as the redefection came despite its vows to beef up frontline defense with an advanced surveillance system in the wake of border breaches in recent years.

"Our military takes this situation seriously and will solidify our psychological readiness posture and establish mission capabilities and relevant systems at an early date," the JCS said in a statement.

Three surveillance cameras installed at the South's general outpost (GOP) just outside the Demilitarized Zone (DMZ) separating the two Koreas spotted the man in question three times, but frontline troops failed to recognize him in real time, according to the JCS.

When the man crossed the barbed-wire fence into the DMZ at 6:36 p.m. Saturday, a warning light came on and an alarm was sent out. The South Korean military sent six troops to the scene to check the fence but failed to find "anything unusual," officials said.

The military checked surveillance camera footage, but it could not find the images of him entering the DMZ due partly to discrepancies between the time when recordings were stored in the server and the time the events actually took place, officials said.

The military first spotted him approaching the border region at 12:51 p.m. After a surveillance camera near the Civilian Control Line leading to the DMZ caught him, the military sent a warning message.

The military did not take any immediate steps to stop him, as he appeared to be headed for a nearby village, officials said.

An operation to capture him got under way only at 9:17 p.m. when the military spotted the man in the DMZ through its thermal observation device. It initially thought of him as a North Korean seeking to defect to the South rather than returning to the North, officials said.

The man was seen to have been north of the inter-Korean border at 10:49 p.m., the officials said. 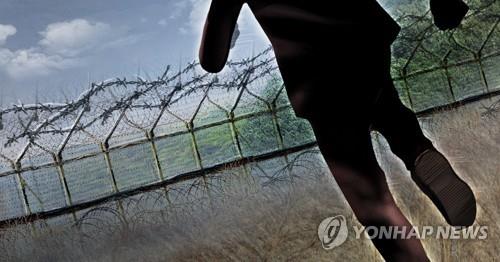 N.K. defector redefected even after military cameras caught him 5 times

N.K. defector redefected even after military cameras caught him 5 times