SEOUL, Jan. 5 (Yonhap) -- Each new elementary school student in Seoul will be given a one-off allowance of 200,000 won (US$167) beginning this year, its education chief said Wednesday.

The allowance, formally named "school admission preparation subsidy," will be first paid to about 69,800 first graders in the capital this year, Cho Hee-yeon, the superintendent of the Seoul Metropolitan Office of Education, said in a news conference. 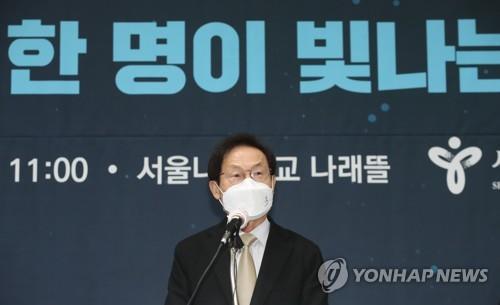 The move will come after all first-year students in the city's middle and high schools were paid an admission preparation allowance of 300,000 won each for the first time last year.

The elementary school subsidy program will cost about 14 billion won, and the education office, the metropolitan government and autonomous districts will share the expense at a 4-3-3 ratio, he said.

The Seoul education office will provide all students with opportunities for customized learning based on artificial intelligence, and one smart device will be given to each first-year student in middle schools, he said.

Cho also said the number of students per class in the first grade of elementary schools will be gradually lowered to 20 or fewer starting this year.

The goal is to increase the ratio of elementary school first-year classes with fewer than 20 students to 56.6 percent this year, 70.1 percent next year and 90 percent in 2024, he said.