SEOUL, Jan. 5 (Yonhap) -- The weekly rally demanding Japan's apology to victims of its wartime sexual slavery marked the 30th anniversary Wednesday, with activists pledging to continue to fight until a final settlement is reached.

Hundreds of activists of the Korean Council for Justice and Remembrance for the Issues of Military Sexual Slavery by Japan and supporters joined the so-called "Wednesday rally" held near the Japanese Embassy in central Seoul.

The latest session marked the 30th year of the weekly rally, whose first gathering dates back to Jan. 8, 1992, when some 30 supporters for Korean victims of the Japanese sexual enslavement first staged a protest on the occasion of then Japanese Prime Minister Kiichi Miyazawa's visit to the country.

Since then, the rally has been held at the same site every Wednesday for a total of 1,525 times so far.

"It has been stunning years, a marvelous journey and an unbelievable span of time," an activist of the council said. "Despite those 30 years, Japan is only repeating regressive steps instead of apologizing while a number of people are trying to whitewash and distort the truth in denial of history." 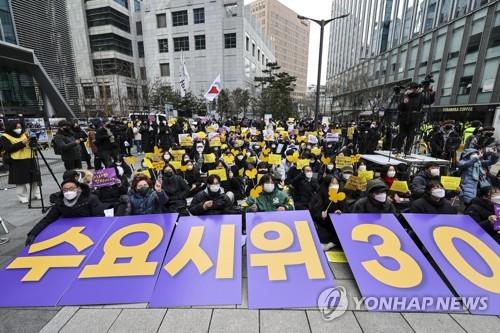 Lee Ok-sun, one of the surviving victims of the wartime atrocity, once again demanded an apology from Japan.

"Japan insists it did not force them into (sexual servitude), but I demand they be honest. That will be an act of repentance," she said in a video message during the rally.

Lee Yong-soo, another outspoken surviving victim, said the so-called comfort women issue should be resolved in the frame of the United Nations Convention against Torture.

Activists pledged to continue the weekly rally until the wartime issue is finally resolved.

Unusually, a high number of riot police were deployed around the rally site in an effort to prevent a clash between supporters of sexual slavery victims and their right-wing detractors.

Earlier in the day, the council for sexual slavery victims filed a petition with the National Human Rights Commission, calling for the government to help stop right-wing activists from insulting participants of the pro-comfort women rally and other obstructive behaviors. 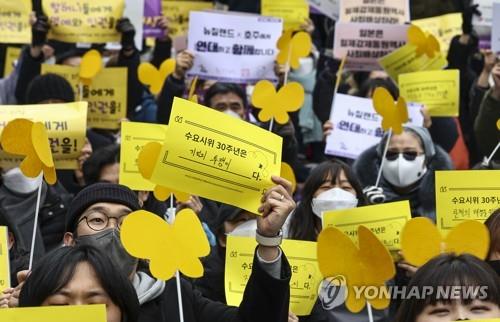