SEOUL, Jan. 6 (Yonhap) -- Main opposition presidential candidate Yoon Suk-yeol and the chief of his People Power Party (PPP) reached a surprise agreement Thursday to put their long-running feud behind them and move forward for election victory.

PPP lawmakers also withdrew their push to oust party chairman Lee Jun-seok as the two patched up the row that has been blamed for the recent sharp fall in Yoon's public support about two months ahead of the March 9 presidential election.

The surprise reconciliation came after Lee said during a general meeting of PPP lawmakers that he truly hopes for Yoon's victory and his criticism of Yoon's campaign was meant to draw attention to the urgent need to win support from younger voters.

He also promised to give his best efforts to win the election.

"Although there could be different views on winning the election, please do not question my sincerity," Lee said. "I will have an honest talk with Yoon today and tommorrow. I hope we can sort out our misunderstanding and have an election that can move the hearts of the people."

Yoon made a suprise apprearance at the meeting as Lee addressed the lawmakers.

"Lee was chosen by people and you PPP members," Yoon said at the meeting. "Let's bring our hands together for the victory of the presidential election in March."

The two embraced each other. 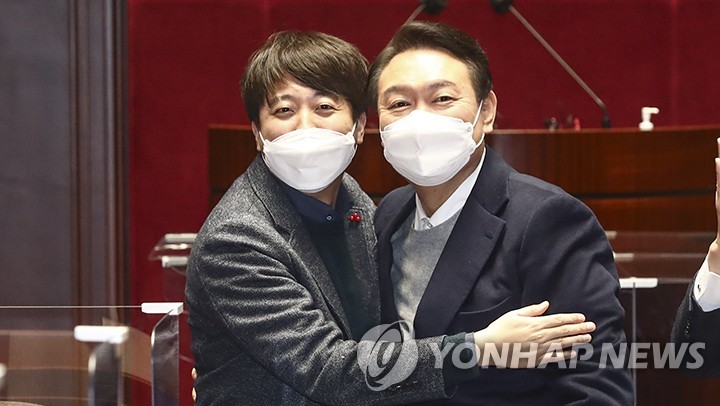 Lee was in hot water after deputy floor leader Choo Kyung-ho and other lawmakers earlier proposed ousting him, saying they cannot tolerate Lee's actions for dragging down support for Yoon in recent opinion polls.

Lee has been at odds with Yoon over campaign issues.

The atmosphere surrounding the PPP was especially intense in the morning as Lee said he would veto Yoon's campaign personnel plan, saying Yoon's camp rejected his campaign ideas the previous day.

At the party's supreme council meeting, Yoon and Lee Jun-seok reportedly quarreled over the appointment of Lee Chul-gyu as the party's strategic planning division chief.

Lee Chul-gyu is known to be close with the party's former Secretary-General Kweon Seong-dong, who was at the center of a power struggle between Yoon and Lee Jun-seok.

With Yoon notifying Lee that he will press ahead with his plan, Lee reportedly expressed strong discontent and said he would boycott supreme council meetings in the future. .

"There were efforts to resolve conflicts from yesterday, but they were not completely accepted," the PPP leader said earlier in the day. "Most of all, I am wondering whether they are really seeking political solutions (to this situation). I will be watching." After skipping the party's general meeting in the morning, Lee showed up in front of the PPP lawmakers and explained his case.

In his opening speech, Lee said he would take any position in the campaign if party lawmakers order him to do so, referring to his departure from the campaign last month due to a row with key aides to Yoon.

"But in that way, we would not win support from young voters, which we need for the election victory," he said, calling for fundamental changes in the way the party campaigns.

However, Lee eventually showed his support for Yoon after the PPP presidential candidate appeared at the meeting and called for "one team" spirit by putting behind their history for the sake of the election victory.

"I think our candidate is the only candidate from the opposition bloc," Lee said after Yoon's speech.

Their last-minute reconciliation came as Yoon is falling behind his ruling party rival Lee Jae-myung and trailing the Democratic Party candidate in voter surveys.

In an attempt to regain support, Yoon on Wednesday announced the dissolution of his campaign committee, including the departure of election czar Kim Chong-in, on Wednesday and set up a new "slimmer and practical" campaign body.