LAS VEGAS, Jan. 5 (Yonhap) -- Samsung Electronics Co. has been working hard on acquisition opportunities, a top executive said Wednesday as the tech giant seeks to provide differentiated products for its customers and further expand its business.

"I cannot tell you in detail, but what I can say is that we are extensively reviewing M&A opportunities in various industries, including chip and finished products," Han Jong-hee, vice chairman and the head of the Samsung Electronics Co.'s Device eXperience (DX) division, said in a news conference on the opening day of the Consumer Electronics Show (CES) in Las Vegas.

"We are moving faster than you might think. We are open to every possibility, and I think we can deliver good news sooner or later," he said.

Still, he did not elaborate on the timing of a potential deal or specific targets. 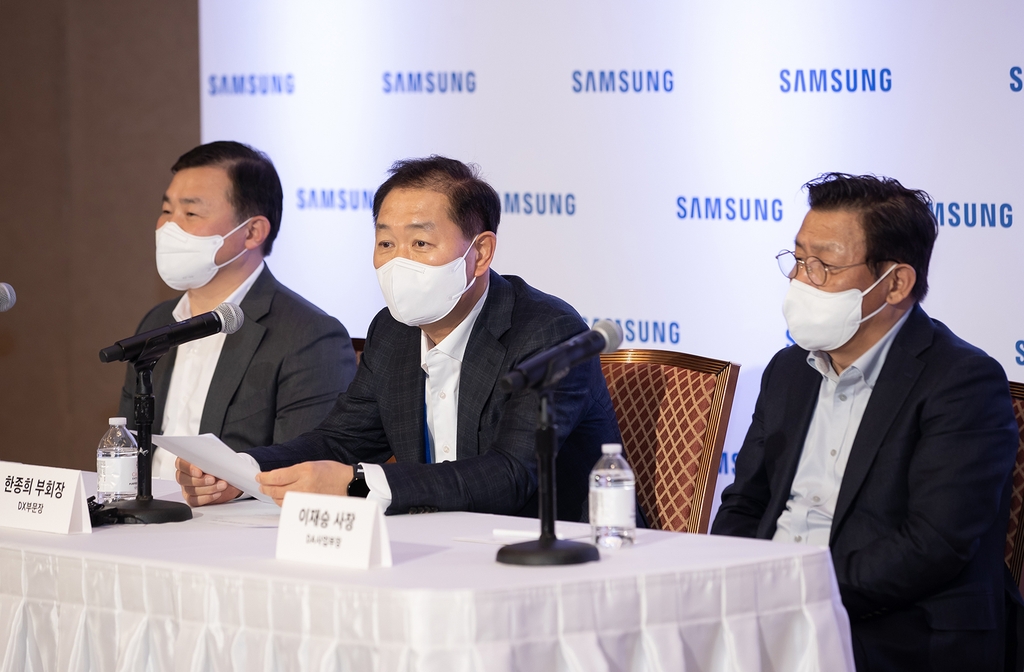 Han said the company's continued success will depend on whether it can continue delivering new and differentiated experiences to its customers through innovations.

"The world has seen more dramatic changes and development in technology over the past two years due to the pandemic than it has seen in the past 20 years," he said.

"Now is time to redefine consumer products. It is about how we can provide added value to users not only with one product, but also through an ecosystem of Samsung products," he said.

"That is also why we created the DX division," referring to the Device eXperience division, which combined the consumer electronics, and IT and mobile communications divisions in December.

"The merge will lead us to take a leap forward to the next level in creating meaningful experiences for users," he said.

A former chief for Samsung's TV business, Han was tapped to lead the newly merged division. The tech giant's TV business had topped the global TV market for 15 consecutive years under his reign.

Despite being a dominant player, Samsung has more to do than ever before, Han said.

"We shouldn't be complacent. We should keep moving forward and work on diversifying premium TV products and creating various form factors."

Samsung did not unveil QD-OLED TVs, which use self-emitting quantum-dot (QD) displays and OLED technology, at the global tech show due to a supply shortage of the panel, Han said.