Lee of the ruling Democratic Party lost 3 percentage points from last week, while Yoon of the main opposition People Power Party remained unchanged, according to the survey of 1,000 adults conducted Monday through Wednesday by Embrain Public, Kstat Research, Korea Research and Hankook Research.

Still, Lee is leading Yoon outside the margin of error for the second consecutive week.

In third place was Ahn Cheol-soo, the presidential candidate of the minor opposition People's Party, at 12 percent, doubled from last week.

Ahn is gaining popularity with young voters warming to him due to his morality, while showing displeasure over the negative election campaigns by the leading candidates, analysts said.

Asked who is the most moral presidential candidate, 35 percent of the respondents picked Ahn, followed by Sim with 17 percent.

The survey showed 14 percent picked Yoon as the most moral candidate, while 13 percent choose Lee. 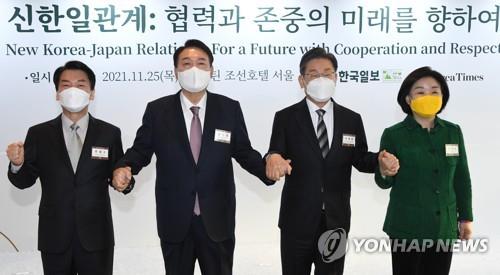