(ATTN: UPDATES with reports of the outcome of the U.S.-Japan security talks in last 4 paras)
By Byun Duk-kun

The top U.S. diplomat also highlighted the need to strengthen the U.S.-Japan alliance to meet such threats.

"Meanwhile, the DPRK's unlawful nuclear, missile programs pose an ongoing threat. And we saw that again this week with the most recent launch," Blinken said, referring to North Korea's test launch of a self-claimed hypersonic missile Wednesday (Seoul time). 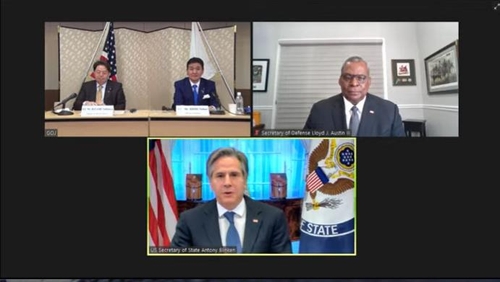 Blinken noted threats facing the allies included what he called China's "provocative actions" in the region and Russia's military buildup along the Ukraine border.

"So, to address these evolving threats, our alliance must not only strengthen the tools we have but also develop new ones," Blinken told the virtual meeting. "And I think that's really the focus of the discussions that are about to happen."

Austin reiterated challenges posed by North Korea and others in the Indo-Pacific region.

"We're meeting against the backdrop of increased tensions and challenges to the free and stable and secure Indo-Pacific region that we both seek -- challenges posed by North Korea's nuclear ambitions and by the coercive and aggressive behavior of the People's Republic of China," he said at the top of the two-plus-two meeting.

"So together we are taking bold steps to improve our alliances, bolster our readiness and strengthen what I call integrated deterrence," he added.

In a joint statement issued at the end of their talks, the U.S. and Japanese ministers expressed concerns over North Korea's nuclear and missile programs.

"Reaffirming their commitment to the complete denuclearization of the Korean Peninsula, the Ministers urged North Korea to abide by its obligations under UN Security Council resolutions, expressed strong concerns over its advancing nuclear and missile development activities, and confirmed the need for an immediate resolution of the abductions issue," said the statement released by the State Department, referring to the issue of Japanese nationals believed to be abducted by North Korea decades earlier.

"They committed to deepen cooperation between and among the United States, Japan, and the Republic of Korea, which is critical for shared security, peace and prosperity in the Indo-Pacific region and beyond," it said.