The survey was conducted at a time when the main opposition party was mired in an internal feud as Yoon disbanded his campaign team for an overhaul.

Sim Sang-jeung of the minor progressive Justice Party came in fourth with 2.8 percent. 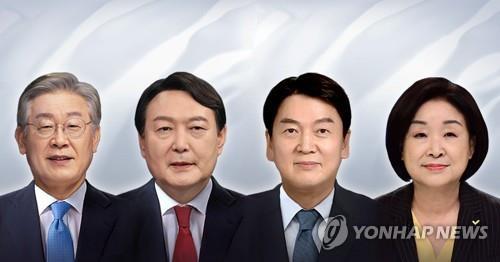 When asked who should become a unified candidate if Yoon and Ahn agree to do so, 35.9 percent of the respondents picked Ahn, while 32.5 percent choose Yoon, the survey showed.

The survey had a margin of error of plus or minus 1.8 percentage points at a 95 percent confidence level.

Another survey of Korea Research International also showed Lee is leading Yoon outside the margin of error.

The second survey was conducted after Yoon and the chief of his PPP reached a surprise agreement to put their long-running feud behind them and move forward for an election victory.

The second survey had a margin of error of plus or minus 3.1 percentage points at a 95 percent confidence level.